Facebook Messenger now comes with Spotify recommendations when music is mentioned in a conversation, as it appears Messenger has integrated the music service’s bot with suggestions by intelligent assistant M.

Starting earlier this year, Facebook’s intelligent assistant M began to monitor words used in conversations to suggest things like Uber rides, peer-to-peer payments, and stickers, or create event calendars. In April, Facebook brought bots into the M suggestions equation with Delivery.com suggestions, and the company continued this effort last month with recipe suggestions from Food Network. Spotify M suggestions were added a little over a week ago, a Facebook spokesperson told VentureBeat.

Use a phrase like “play some music” in a conversation and M may offer the suggestion: “Find Music.” Tap the suggestion and a webview will open that allows you to share songs you’ve recently played, share music featured by Spotify, or create a group playlist with friends.

Not a fan of these suggestions? Tap your profile icon in the top left-hand corner and go to M Settings, where you can disable suggestions. 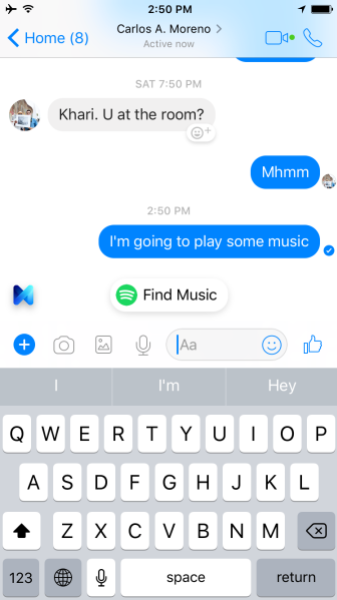 Spotify first came to Messenger in March 2016, when users gained the ability to share favorite songs and playlists.

The Spotify Messenger bot launched in April, as did a chat extension that features the bot within conversations if you tap the blue “plus” symbol in the bottom left-hand corner of a Messenger conversation.

In June, Spotify gave Messenger users the ability to create playlists with groups of people in Messenger.