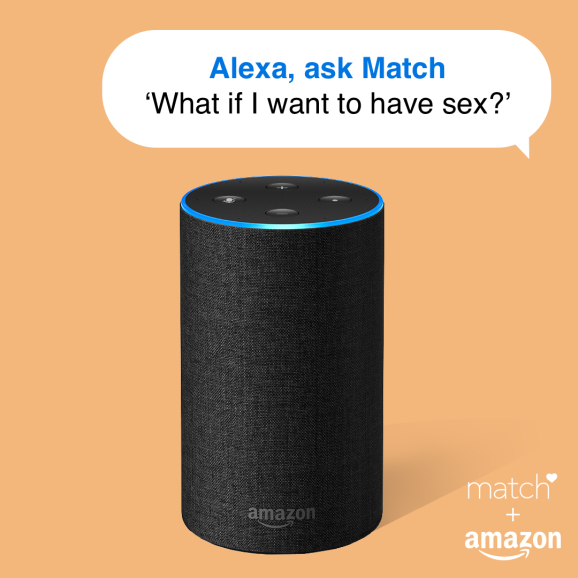 Match.com today launched a new Alexa skill that gives people first date advice, and it’s not great — not in every regard at least.

Update on January 22: The voice app has been pulled from the Alexa Skills Store to consider improvements, a source familiar with the matter told VentureBeat in a phone call.

The Alexa voice app does deliver some helpful tips, like you may want to wait two days to message someone after the date, and the average person spends around $60 on a first date, but the Alexa skill falls short in some important areas.

Ask “What if they want to have sex on the first date?” and it may answer “Only if you must, or they’re really hot” or “If you do too, do them. If you don’t, DO YOU.”

Ask “What if I want more than one drink?” and the skill says “Allow yourself two cocktails if they’re cute. Have six if they’re not.” If you don’t like your date, the skill suggests you “Smile, nod, and order another drink.”

Those are some of the more than 30 questions the Match.com Alexa skill can answer at launch.

What’s noticeably missing from questions the skill can answer is “What’s the definition of consent?”

When the skill tells you to have six drinks and only have sex “if you must,” spelling out the definition of consent seems like the right thing to do.

If the skill doesn’t understand a question or query — and there are many questions the skill can’t answer today — it doesn’t say it can’t understand you. It just says “LOL.”

Now, there are many less-than-useful bots or voice apps available — what Phil Libin referred to as a long tail of crap — but Match.com’s Alexa skill stands out because it actually has a large corpus of knowledge to draw from and could give people lots of practical dating advice based on more than 20 years of matchmaking.

In addition to the insights Match no doubt has from gathering data about millions of users, the company also does a survey called Singles in America. The last survey was conducted in 2016 and gathered answers from 5,500 single respondents. More than 35,000 people have participated in the survey in its seven-year history, a company spokesperson told VentureBeat in an email.

That’s how the Alexa skill can give you fairly accurate advice like first dates at sushi restaurants are 170 percent more likely to lead to a second date, or 15 percent of men and 7 percent of women expect to make out on the first date.

The latest version of the survey shares details about the best place to flirt with singles (bar, laundromat, and gym), top signs of commitment after a first date, and general attitudes toward one-night stands and feminism.

In addition to that missing consent question, at this time the skill’s knowledge base also lacks other helpful advice that can be found in the report. The skill can tell you things like the majority of people dislike it if you lie on your profile and most people prefer dates at night, but would be helpful if it included more from the survey about what turns people on (if you both binge-watch the same shows) and what turns them off (complaining on social media).

“The initial idea around the Match skill was a fun and light way to help singles with their upcoming dates, however we will continue to innovate and evolve the skill based on overall interest and engagement,” a Match spokesperson told VentureBeat in an email.

Match.com isn’t alone in a lackluster voice app experience for dating. Eharmony’s Alexa skill can link with a user profile to tell you about latest matches or whose viewed your profile, but also leaves a lot to be desired.

According to announcements made late last year by Amazon, Alexa skills will soon be able to recognize your voice, which will likely lead the way to more personalized voice app experiences. A Match Alexa skill could be more helpful if it incorporated more insights from its survey, or if it offered personalized advice based on an upcoming date or your match history.

Match says its skill will be able to answer more questions in the future, and it will be exciting to watch how dating plays out on third-party platforms for AI assistants like Alexa and Siri. But as it stands today, the Match Alexa skill will have to get smarter to be a genuinely helpful wingman.

If you want tips for your next date, ask a friend. That’s the best source to ask for dating advice, according to Match.com’s own survey.

VentureBeat asked Match why a question to define consent was not included in its skill. This story will be updated if we hear back.