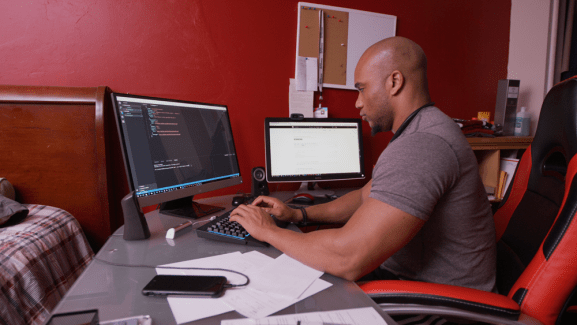 Joram Clervius, one of the first 20 students to graduate from Lambda School.

While the tech industry offers some of the highest-paying and fastest-growing jobs in the U.S., obtaining one is still out of reach for many Americans. Particularly for those who are looking to make a career change, it’s expensive. Tuition for six-month coding schools can run upwards of $10,000, and some graduates still have to complete an internship or two before employers will consider them for an entry-level job engineering job.

Enter Lambda School, a nearly year-old startup that aims to remove some of the traditional barriers that have scared students away from coding schools in the past. Today, Lambda School announced that it has closed a $4 million seed round, led by Y Combinator and Tandem Capital. The school has also graduated its first batch of 20 students from its software engineering course — five of whom already have job offers a week after graduation.

Lambda School is one of a number of new tech school entrants that is giving students the option of paying for their education via an income-share agreement, rather than paying for tuition upfront. The idea is to reassure students, some of whom may have felt that their previous degrees or training have been worthless in the job search, that Lambda School’s main goal is to prepare them for a job.

“To some degree — if a student doesn’t get a job, that’s on us and we shouldn’t get paid,” Lambda School cofounder Austen Allred told VentureBeat.

Allred, formerly a senior manager for LendUp in San Francisco, grew up in a town of 4,000 people in Utah. Allred said he was inspired to start Lambda School after seeing friends from his hometown who wanted to break into the tech industry but didn’t have the means to do so.

For now, Lambda School only has one course — a six month-long computer science “academy” where students learn the basics of software engineering. Classes run from Monday-Friday, 8 a.m.- 6 p.m. PST, and are broadcast live. Students have to fill out an application, participate in a phone interview with Lambda School, and complete a crash course in web development — HTML, CSS, JavaScript and Git — before they are accepted into the course.

Though Lambda School just graduated its first class, it starts a new academy each month, so right now there are about 200 students enrolled in its courses. The school is also planning to introduce a second academy in April, focused on artificial intelligence and machine learning, which roughly 40 students have already enrolled in, as well as an iOS course in July. Allred says the school hopes to graduate 1,000 students by the end of the year.

That means that a student who makes exactly $50,000 per would have to give up roughly $708 of his or her paycheck each month to Lambda School. That’s far more than what the average millennial saddled with college debt pays each month — according to the Federal Reserve, the median monthly payment for U.S. adults between ages 20-30 who have student debt is $203.

The percent per paycheck that Lambda School graduates will have to hand over is so great that the income share agreement is likely out of reach for prospective students who are saddled with any other debt, such as student loans from their undergraduate studies.

But Lambda School’s pitch is that if students forgo more of their paycheck, they can get rid of their debt more quickly — and that the school can give the students the tools they need to find not just any job, but a job that pays more than any job they might have been able to find in their previous industry.

Getting a quick start

Joram Clervius, a member of Lambda School’s inaugural class, said that he turned to Lambda School after trying to learn software engineering on his own, but found that studying on his own wasn’t enough to land him a job. The Florida native had received a scholarship to study biology at Florida Agricultural and Mechanical University, but dropped out after deciding he wasn’t interested in becoming a doctor anymore. He began working as a web developer for a real estate company, aspiring to obtain a greater role in the tech industry, when he saw an advertisement for Lambda School.

“I had zero hesitation because it seemed like they wanted to focus more on the students than on making money,” Clervius said.

Clervius was one of the first Lambda School graduates to receive a job offer. Before the course was over, he moved to Ann Arbor, Michigan to work as a senior developer for local software company Nexient. He will make $85,000 a year at his new role, and chose to pay for his Lambda School tuition via an income share agreement.

However, Lambda School will need many more students to receive job offers like the one Clervius got to make enough money to build a sustainable business.

To help increase the odds that students will find jobs quickly after they graduate from Lambda School, the school has secured “hiring partnerships” with 75 companies, including PayPal, IBM, Eventbrite, and 30 companies within the Y Combinator network. Some hiring partners agree to look over resumes of Lambda School students, while others have internships for graduates available.

“We have a full-time career development team, so they’re constantly interviewing, going over resumes, helping [students] figure out the right way to reach out to people,” Allred said. “We view that as part of the job, which is different from most schools.”