How great an effect a tech company has when it moves into a new town comes down to one thing: jobs. And it’s not just how many jobs the company itself creates but how its presence then prompts other businesses to hire from that area.

For many Heartland cities, the latest tech arrival is Amazon, thanks to its massive fulfillment center operation. But a new study from the left-leaning Economic Policy Institute finds that Amazon fulfillment centers aren’t creating many new jobs.

The EPI pulled data from the Quarterly Census of Employment and Wages, a project of the Bureau of Labor Statistics. In fact, the report shows that counties where Amazon fulfillment centers were placed saw “small reductions in county-wide employment — albeit not statistically robust.”

These reductions could be due to a variety of factors, including a decrease in population or a loss of retail jobs. But, in any case, there’s not enough evidence to suggest that fulfillment centers are attracting new workers and companies to the town on the whole, says the EPI. 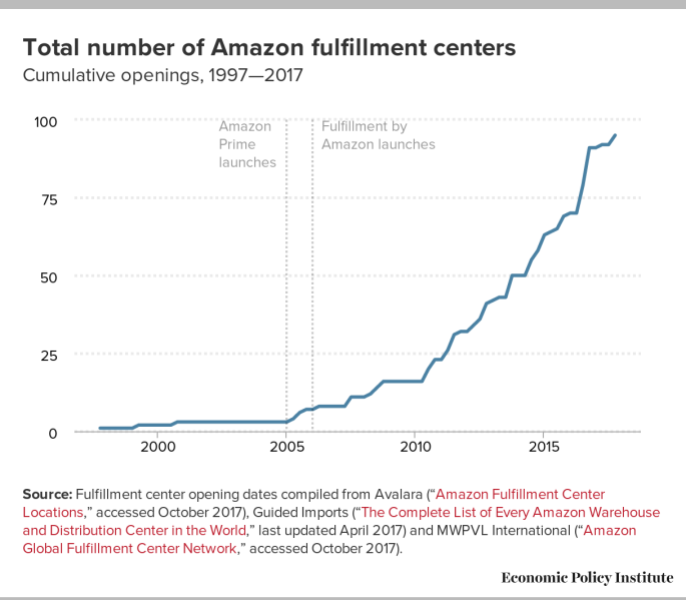 Above: The number of fulfillment centers opened by Amazon each year since 1997.

The EPI study did not look at whether existing businesses reported seeing an increase or decrease in new business after Amazon came to town — though this can be another measure of economic impact.

According to the report’s authors, recruiting Amazon to build a fulfillment center is an “ineffective strategy to boost local employment,” and towns should think twice before extending incentives to do so.

Amazon countered these findings in a statement, saying that “in addition to the 200,000 Amazon employees in the U.S., we know from 2016 data, which is more current than the EPI data, Amazon’s investments led to the creation of 200,000 additional non-Amazon jobs, ranging from construction jobs to healthcare industry positions. In fact, over the last five years, counties that have received Amazon investment have seen the unemployment rate drop by 4.8 percentage points on average, and in some areas, the rate has been lower than the state average.”

The EPI report was released during the middle of Amazon’s search for a city to house its second headquarters. However, it’s important to note that the results of this study don’t necessarily mean the city that lands HQ2 will see the same employment effects as the towns that are home to fulfillment centers.

The jobs that will be offered at HQ2 are vastly different from those typically found in fulfillment centers. The average total compensation for jobs at HQ2 will be $100,000, according to Amazon. The pay at warehouse jobs ranges, but could be around $11.50 per hour.

Many of the jobs at HQ2 will also be management and engineering jobs — which require a greater amount of career experience or training. HQ2 hires may entice other tech companies to set up shop nearby in hopes of poaching some of that talent. Meanwhile, warehouse workers have jobs that are physically demanding, require little experience, and, as The Atlantic reported this morning, are burdened by grueling production goals.

The findings of the EPI study are echoed by other researchers who argue that bringing a large tech company to town is not a silver bullet. They maintain that any economic effects on the local economy depend on the types of jobs the company brings.

Michael Hicks, a professor of economics at Ball State University in Indiana, previously told VentureBeat that “there are almost no development clusters anywhere in the world where the production is located at the same place as the high-end jobs of manufacturing and R&D.”

So if a town wants to attract high-level tech jobs, it can’t just recruit production or distribution outposts. It has to recruit R&D and other technological development centers.

The EPI also advocates that cities and towns “invest in public services (particularly in early childhood education and infrastructure) that are proven to spur long-term economic development.”