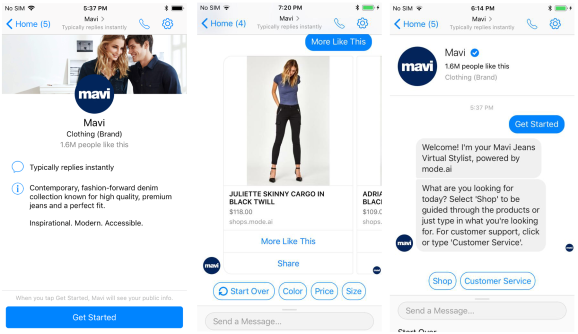 The Mavi Jeans bot was created with Mode.ai's bot platform

Since coming out of stealth last year, Mode.ai has created bots for Levi’s, Louis Vuitton, and ProFlowers, but today the computer vision startup announced it has launched a platform for small businesses and ecommerce merchants to create their own Facebook Messenger bots.

Since automated bots for sales or customer service have grown in popularity in recent years, there are dozens of bot platforms to choose from, but Mode.ai’s offering for small or medium-sized businesses (SMBs) leverages its computer vision AI, trained by millions of images from online retailers, to create bots with both text and visual search capabilities.

That means a user of the bot could take a picture of an item of clothing and have it matched to a similar item in a merchant’s shop. Most SMBs don’t have an inventory large enough to make visual search a huge value add, but in time, the goal is to use computer vision to power a fashion recommendation engine that enables a referral and revenue-sharing program for ecommerce businesses.

“The example I like to give is we’re powering a bot for the t-shirt company that doesn’t sell anything but t-shirts, but another company sells the pants or the jeans,” Mode.ai CBO Karen Ouk told VentureBeat in a phone interview. “They could promote each other’s items within their own bots.”

The initiative to quickly generate bots that act as a storefront on Facebook Messenger will begin by serving Shopify’s more than 500,000 merchants.

“They submit and then we do all of it on the backend stuff to pull in all of the product information, metadata, and tags and generate that bot automatically based on the structure they have setup on their Shopify site so we map it in a similar way,” Ouk said.

The SMB offering from Mode.ai will surface many of the capabilities found in the Mode.ai styling bot, which uses computer vision to match a user’s style with clothes from brands like Amazon, Levi’s, and other retailers.

At launch, shoppers who interact with bots by Mode.ai for small businesses will be taken to the merchant’s store to complete transactions. In the future, a one-click purchase within the bot may be provided.