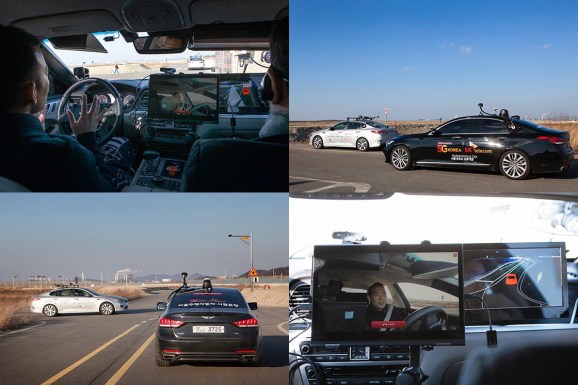 If you thought a network of self-driving cars was years off, think again: South Korean and Spanish carriers today announced successful demonstrations of 5G “vehicle-to-everything” (V2X) communications technologies, and one carrier plans to roll connected self-driving cars onto public highways next year.

For the more impressive 5G-V2X demonstration, SK Telecom and the Korean Transportation Safety Authority set up a self-driving car pilot city in Hwaseong, covering 3.875 million square feet with Samsung’s 28GHz 5G cellular technology. SK Telecom claims that for the first time ever, two cars equipped with 5G hardware coordinated their movements using 5G, cameras, AI, and a 3D HD map. V2X communications let the vehicles monitor each other’s routes and the changing road safety conditions as they drove through a 1.24-mile area that included a highway, a crossroads, and a school zone.

Basic tests saw the cars automatically accelerate on the highway, slow down at the school zone, and stop instantly for a simulation of a walking child. The cars also dynamically rerouted around construction and coordinated which vehicle went first at crossroads, as well as updating the 3D map with current traffic conditions, including discovery of a simulated multi-vehicle accident. According to SK Telecom, each car communicated over 100 times per second over 5G-V2X and was able to rely on the always-updated map to avoid accidents in vision-impairing conditions.

While Telefónica has committed to offering 5G in Spain over the next three years, it has not provided any timetable for bringing self-driving cars to Spain’s highways. SK Telecom said that it will bring vehicles with 5G-V2X technology to major South Korean highways in 2019.