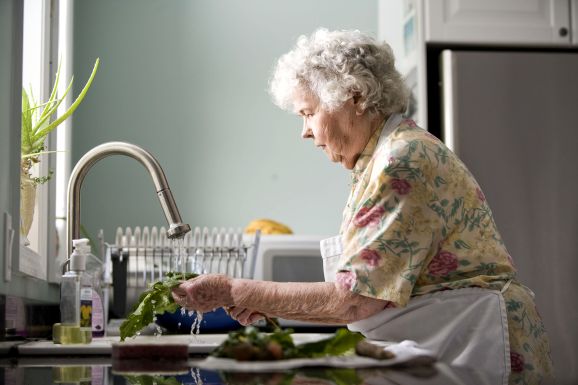 Folks who have a finger on the pulse of innovation know that the Internet of Things will likely change the way we live and work. Sensors embedded in Wi-Fi-enabled products can transmit data that helps users make decisions, detect problems, and streamline their routines. A combination of IoT and AI can form a particularly helpful technology called ambient intelligence. This smart home solution shows a lot of promise to make life a little easier for everyone, but one demographic group stands to gain notably: aging adults.

Getting older comes with numerous challenges, especially as people realize the things they used to do without problems become more difficult. However, there are many fascinating ways AI-powered IoT devices can help older members of society live safer, healthier, and more fulfilling lives.

Many seniors take multiple medications a day. Forgetting to take just one of them as scheduled could have severe consequences. That’s one reason why Neura, a company that builds AI apps to integrate with IoT devices, made medication compliance a point of focus.

Neura’s technology learns users’ habits and prompts IoT products, such as wearables, to give users actionable reminders about taking pills or checking their blood sugar levels. Statistics indicate that failing to take medication properly is responsible for up to 125,000 deaths annually. Neura’s technology adapts to its users’ routines and integrates with complementary devices in hopes of helping improve patient adherence to orders from health care providers.

Amazon helped the mainstream population recognize the promise of voice-activated speakers with its Alexa-powered products. Similarly, the LifePod could change how elderly people and their caregivers think about technology and what it can do in independent living situations.

The LifePod is touted as the world’s first voice-controlled virtual caregiver. Developers modeled the device after Alexa so that it is able to respond to conversational commands. The device also uses AI and machine learning to give insights into a user’s condition, daily activities, and behavioral trends. Upcoming versions of LifePod will also include sensors and voice triggers that notify outside parties if a user falls.

Pervasive loneliness can strike at any age, but older adults are exceptionally vulnerable to it. Opportunities to socialize and the ability to maintain long-standing relationships are often sacrificed when seniors realize that the aging process makes their favorite activities either impossible or so difficult they’re no longer enjoyable.

ElliQ is an intelligent robot that seeks to ease loneliness. The bot’s head bobs in response to human interactions, and its body includes a touchscreen tablet that connects users to the internet. When ElliQ notices a person hasn’t reached targeted goals, it recommends a personalized activity, like taking a walk. ElliQ also plays tunes to help seniors listen to music throughout the day.

The gadget can also act as a speakerphone to allow convenient calls to loved ones. Alternatively, family, friends, and caregivers can schedule regular, phone-based check-ins. ElliQ can also send alerts to caregivers in the event of an emergency.

Some older individuals, especially those who are already wary of technology, may resist using innovative options because they fear the gadgets will always be “watching” them. However, ambient intelligence can work in ways that are largely non-intrusive by only intervening if something’s wrong. Some can also provide audio feedback that could help with memory loss.

In other words, while some IoT and AI-powered devices primarily perform monitoring functions, those based on ambient intelligence take on supportive roles. The gadgets align with an aging adult’s desire to live freely and offer them the ability to exercise power over the choices they make. When necessary, devices that work with ambient intelligence can notify caregivers or emergency services personnel to help users avoid dangerous or even fatal consequences.

Kayla Matthews is senior writer for MakeUseOf. Her work has also appeared on Vice, The Next Web, The Week, and TechnoBuffalo.