Artificial intelligence, cloud computing, and the internet of things (IoT) will have bigger impacts on the revenues of chip makers in 2018, according to accounting firm KPMG‘s survey of 150 semiconductor industry leaders.

Two-thirds of the leaders cited IoT as one of the top revenue drivers, up from 56 percent in last year’s survey. Cloud computing and AI were each cited by 43 percent of leaders, compared to 27 percent last year for cloud and 18 percent for AI. Wireless communications was at the top of the list, but it was cited by fewer respondents this year.

“The increasing demand for IoT, AI, and cloud applications is driven by their individual value and their value to each other. Cloud infrastructure is critical to enabling AI and capturing IoT-produced data. AI will enable better analysis and use of the data,” said KPMG global semiconductor industry leader Lincoln Clark, in a statement. “Though the number one revenue driver remains wireless applications, its importance fell slightly in 2018, though we do anticipate growth as 5G begins to roll out in future periods.” 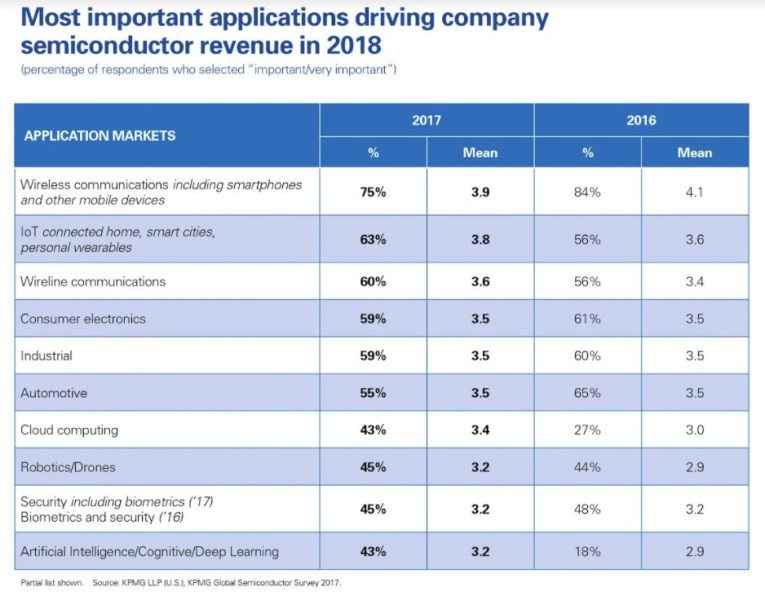 Above: The most important applications driving semiconductor revenue in 2018.

The leaders said that disruptive technology and cybersecurity are rising as strategic priorities.

Asked to list their top three strategic priorities over the next three years, respondents this year again placed diversifying into new businesses areas at the top of their list, followed by M&A and joint ventures, and talent development or management. Implementing disruptive technology made a significant jump to fourth.

Minimizing cybersecurity risk cracked the top 10 in the outlook, and KPMG said that it likely would have been higher had the survey been taken after the Meltdown and Spectre news hit in early January.

The survey also found that semiconductor leaders were more optimistic this year than last year when asked about their outlook on profitability, revenue growth, capital spending, research and development spending, and workforce growth.

“Given the industry’s historically strong performance in 2017, we interpret these responses as tempered optimism,” said Clark. “It’s unlikely we’ll see a repeat of 2017’s growth rate for global semiconductor revenues, but 2018 should be another successful year in its own right as more than one-quarter of the respondents expect their revenue to grow at least six percent.”

Tax reform is expected to impact the chip makers.

“While the survey was conducted before the passage of U.S. tax reform regulation, we are starting to see the impact of tax reform reflected in the recent earnings announcements by semiconductor companies,” said Tim Zanni, KPMG’s global and U.S. technology sector leader, in a statement. “We anticipate that the access to offshore funds will increase the speed and intensity of activities such as capital equipment investments, M&A, and the reassessment of buybacks and other capital management strategies.”

Asked to rate which region of the world is most important to their company’s semiconductor revenue over the next three years, 47 percent of those surveyed said the United States, which was followed by China, Europe, Taiwan, and Japan. The latter two countries were more widely cited this year compared to last, while the first three dipped in importance.