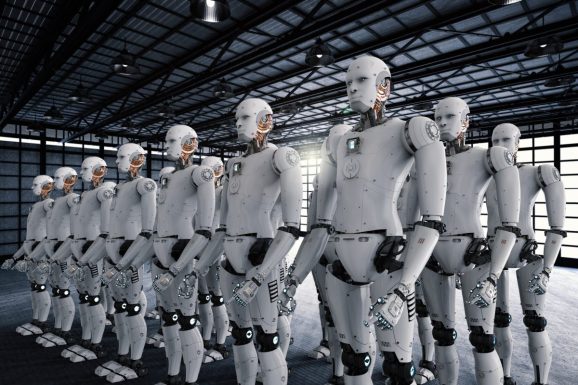 Journalists have expended a lot of ink covering AI’s potential to eliminate jobs. Examples cited include autonomous vehicles, machines that read X-rays and search for new drugs, and algorithm-driven bots that respond to customer service inquiries. Along with a lot of hand-wringing, these advances have spurred increasingly serious discussions about the need to provide a guaranteed minimum income if there are no longer enough jobs to go around.

Many headlines suggest that AI and related technologies will lead to a largely jobless future — as detailed in a recent article on NBC News. And we are already seeing evidence of automation-induced job loss, with more on the way. A Forbes story reports analyst firm Forrester’s prediction that automation will take nine percent of U.S. jobs in 2018, partly offset by a two percent growth in jobs supporting the “automation economy.”

The tremendous amount of automation over the last decade is particularly evident in sectors like manufacturing and customer service. And a study by the McKinsey Global Institute indicates that AI and automation will lead to a transition on the scale of the industrial revolution in the early 1900s, when much of the global industry switched from farming to factory work.

Yet, in the United States at least, levels of unemployment are currently at near historic lows. Corporate earnings are up, and even wages, which were the remaining weakness following the Great Recession, have started to grow. Summing up 2017, career outplacement firm Challenger, Gray & Christmas reported that job cuts in the U.S. economy were at the lowest annual total since 1990. Moody Analytics chief economist Mark Zandi recently said, “Given the strong January job gain, 2018 is on track to be the eighth consecutive year in which the economy creates over 2 million jobs. If it falls short, it is likely because businesses can’t find workers to fill all the open job positions.” This trend is not limited to the U.S., as major economies around the world are experiencing a similar wave of growth.

What accounts for current job gains?

Is this job growth a temporary condition with waves of AI-induced unemployment just around the corner? That could be. Many AI technologies are still at an early stage of development, so their impact so far has been minimal. Nevertheless, AI projects are a high priority. In a recently commissioned poll of IT professionals by real-time database provider MemSQL, 61 percent of respondents said that machine learning and AI are their companies’ most significant data initiatives for 2018.

We’ve yet to reach an AI-induced tipping point, and the timing of business cycles is another significant factor. As a story in The Atlantic notes, most job losses occur during periods of recession, when “firms let excess workers go and learn more about labor-saving technology to maintain their profits.”

A PwC study describes three overlapping cycles of automation that will stretch into the 2030s: the algorithm wave, the augmentation wave, and the autonomy wave. The study notes that in the first algorithm wave, projected to extend into the early 2020s, automation will take relatively few jobs. The more impactful waves are expected to come in succession from the mid- to late-2020s and continue into the mid-2030s. According to PwC’s findings, automation will impact 30 percent of jobs during this timeframe.

But it’s the latter two phases that prompt the greatest concern. It’s not hard to imagine a million out-of-work truck drivers and factory workers taking to the streets. The political and economic consequences of major job displacement are potentially dramatic. One announced candidate for the 2020 U.S. presidential race is already campaigning on these concerns. As reported by the New York Times, former tech executive Andrew Yang is warning of the coming robot apocalypse. Yang notes that it was congressional districts in states with the highest concentration of automated manufacturing jobs that swung the 2016 presidential election.

Of course, job displacement has always followed major technical innovation. An example is the transition from the horse economy to cars, well-documented in a LinkedIn post by Brad Smith, president and chief legal officer at Microsoft. The industry that sprang up around cars was far larger than the industry that had existed around horses, yet unpredictable consequences included the impact on agriculture. Smith notes that the reduced demand for horse feed contributed to an agricultural depression in the 1920s, which worsened even further during the Great Depression. A weak agricultural sector dragged down the entire U.S. economy in the 1930s.

The question is whether anything will be different this time around. As the NBC News article points out, AI technology isn’t simply hoping to make targeted industries more efficient; it’s aiming to replace the human mind. Nevertheless, the PwC study asserts that AI, robotics, and related technologies should “generate enough new jobs to broadly offset the potential job losses associated with automation.” Economist James Bessen argues that this kind of tradeoff is often the case, citing that automation has largely taken over the discovery of legal documents, yet jobs for paralegals and legal-support workers grew faster than the overall labor force. He goes on to note other examples and concludes that these are not exceptions since automation lowers the cost of delivered goods and services, which in turn attracts more customers and leads to in increase in overall demand.

This fits with a Deloitte study reported by The Guardian that claims the debate has been skewed toward the job-destroying effects of technological change, which is more easily observed than its creative aspects. The study further claims that — based on data from the last 140 years — technology has created more jobs than it has destroyed. The possibility that AI and automation will lead to more jobs than they eliminate is echoed by analyst firm Gartner, which stated that AI-related job creation will reach a net 2 million new jobs by 2025.

Will this time be different?

AI and related technologies will certainly change or eliminate many of today’s jobs, though these technologies will also create entirely new positions and industries. The transition to the AI economy will be uneven and, as with the Great Recession, it’s clear that many people will be left behind. In fact, McKinsey estimates that between three and 14 percent of the global workforce will need to switch occupations over the next 10-15 years. And unpredictable consequences from these shifts could well emerge.

Our institutions of government, business, unions, and education will all have critical roles to play in helping people through this transition — even more so because these shifts usually land hardest on those least equipped to deal with them.

But it’s my view that concerns of AI leading to a jobless future are greatly overblown. AI will likely follow the route of previous instances, when significant innovations have led to a period of temporary job loss, followed by recovery and a transition to new jobs and industries.

Gary Grossman is a futurist and public relations and communications marketing executive with Edelman.