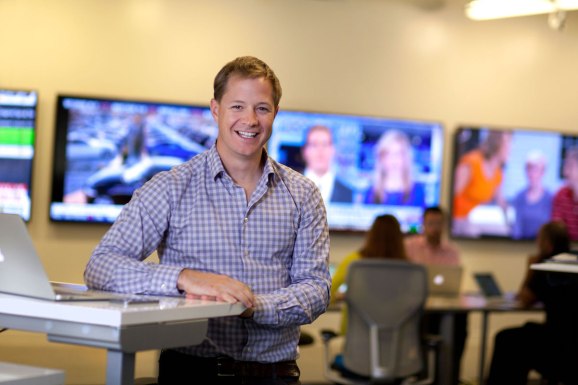 When Sequoia Capital partners Chris Olsen and Mark Kvamme left Silicon Valley to start their new venture capital firm in Columbus, Ohio, they bet their careers on the idea that the Midwest was one of the biggest overlooked investment opportunities.

Today, there’s still no equivalent of Sand Hill Road in the Midwest. But interest in investing in Midwest startups hasn’t cooled off since Olsen and Kvamme started Drive Capital in 2012. The firm is now on its second, $300 million fund, and has invested in 29 companies to date. Some of the firm’s most well-known investments include Columbus-based CrossChx, health care software startup Aver, and language learning service Duolingo.

VentureBeat recently spoke with Olsen, a Cincinnati native, to get his take on how Midwest startups have evolved since he first moved his business to Ohio nearly five years ago, in April 2013. Olsen says that the types of tech startups that are being created in the Midwest have diversified, which he attributes in part to the uptick in the number of STEM and engineering graduates from Midwestern universities.

This interview has been edited for clarity and length.

VentureBeat: Given that you’ve lived in Columbus for almost five years now, what do you feel like has changed in the Midwest startup scene since you first started Drive Capital?

The second thing I’d say is the mix of the types of companies that we have the opportunity to invest in has also shifted. Where when we first got here there were a lot of more companies that I would define as “technology-enabled services businesses” — it was marketplace businesses that were powered by technology — today there are a much, much larger number of what I would consider “true technology companies.”

If I look at what we’re investing in today versus what we were investing in in the beginning, today it’s next-generation platforms for artificial intelligence, it’s machine learning for data science, it’s next-generation consumer-facing applications for insurance and education that are really underpinned by a platform of technology. That piece is exciting because I do think that’s also meant that the companies we’re investing in seem to be getting much more interest from the Coast than when we first got here.

Olsen: I think they realize that the Midwest is a much better place to build a business today. It is the frontier of innovation, and it really is the opportunity of a lifetime to see this next economy swelling. People in Silicon Valley are not going to come here for any other reason than they have an opportunity to be more successful investing in companies here. It’s certainly not a majority held position, but we invest with so many venture firms now out in Silicon Valley.

One of them was telling us the other day that they’ve actually embarked on a strategy [in which] they will only invest in companies from the Valley if they will immediately open up an office outside of the Valley, and they’re looking at places like Denver and Columbus and Chicago as ideal places. Because there is better access to talent, there, there is better access to customers there, and it’s important that entrepreneurs use every advantage they can in their favor to help them be successful.

VB: Are there things you feel like investors in Silicon Valley still get wrong about the Midwest startup community?

Olsen: [What] they get wrong is they’re not spending enough time here. The incentives are still in a place where they miss the next great companies in Indianapolis — and they don’t really hold themselves accountable for that. If they miss an investment opportunity in Silicon Valley, they’ll say “How could we do that?” as that’s kind of their core focus.

You are starting to see a lot of really smart people spend more time in the Midwest, and say “You know, this is my primary focus area” — especially some of the younger partners in these firms, who are saying “Hey, I have an opportunity here to do something different, and maybe I can make a career by investing in the opportunities outside of Silicon Valley.”

VB: We’ve talked about this increased interest from Silicon Valley investors, but I’m curious if you’ve noticed any of your portfolio companies hiring more workers from Silicon Valley. The area had the largest domestic out-migration rate in 2016 and 2017 that it had had in 10 years.

Olsen: Those folks are great marketing examples — but the reality is, if your startup is dependent upon your ability to recruit people exclusively from California, it’s just not going to scale. Certainly if I look in our portfolio, we’ve got really talented people [that work for our companies] that have come from places like Twitter and Airbnb and Facebook and Google.

If you really look at the volume of people who are working in these companies, it comes from your ability to attract talent locally. Nationwide [in Columbus] has more engineers than Facebook. And the ability to find those pools of talent around town — from any of the other big companies, or you tap into the engineering departments of these schools — that’s really where the engine of large numbers of talent [is]. So if you want to hire more people from Silicon Valley, yeah, you can do that. But there’s no way to recruit 100 engineers out of Silicon Valley on an annual basis. You just need to find ways to develop the talent locally.

VB: What kind of traction do you think the Midwest startup scene is poised to get in, say, the next 5-10 years?

Olsen: I don’t see it slowing down, that’s for sure. I mean, I see more money, more funds getting started here, and that’s a super exciting thing. They’re also getting started at different stages. I think we’re going to look back five years from now and say “Wow, we’ve come a long way” — but relative to Silicon Valley, this is just the beginning.