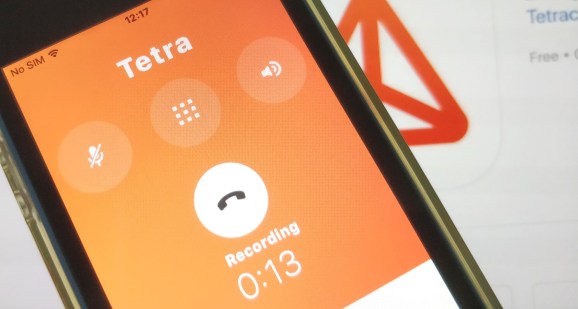 Nobody really enjoys taking notes, but it is an unavoidable fact of life for many in business and academia. During phone calls, specifically, it can be hard to focus on what’s being said while ensuring you accurately jot everything down in real time.

But what if there was a way for you to record a call through your mobile phone and have a full transcription of the discussion delivered to you within minutes? That’s exactly what San Francisco-based Tetra is setting out to enable with its AI-powered iPhone app that not only records your calls but converts the conversations into written form using deep learning and natural language processing (NLP).

With $1.5 million in seed funding, Y Combinator alum Tetra has announced a notable update to its mobile app. So far, Tetra has only worked with outbound calls, but now subscribers will be able to enjoy the full benefits of Tetra for incoming calls, too.

By way of a quick recap, Tetra is basically a VoIP app that works similarly to Google Voice, insofar as it allocates you a dedicated Tetra number that must be used for all outgoing/incoming calls. Once a call is complete, Tetra will spend a short period of time generating the notes. 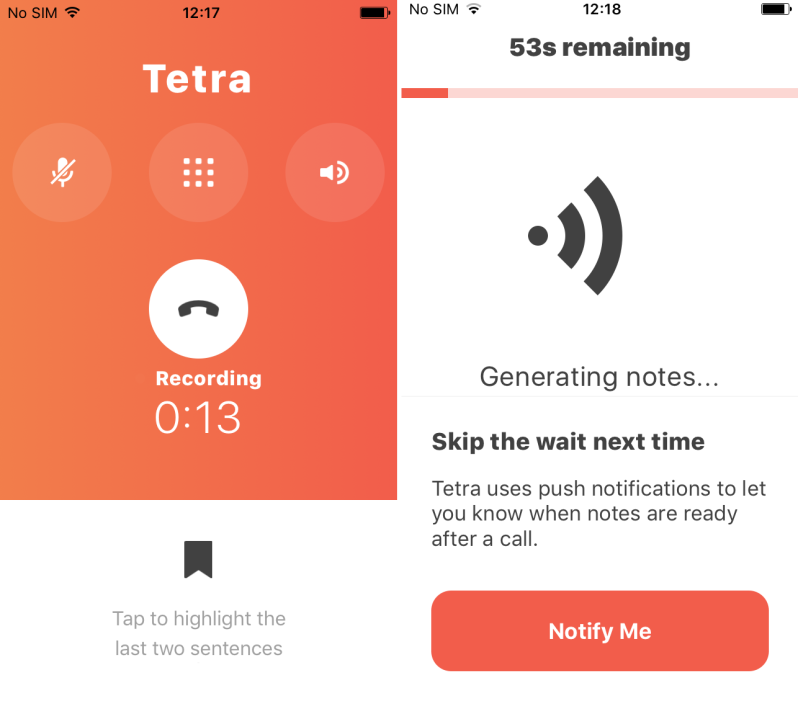 Above: Recording then processing notes

Based on our brief tests, Tetra was able to accurately record and transcribe audio, though we didn’t put the app through the wringer in terms of throwing complex names, abbreviations, or colloquialisms into the mix. For normal day-to-day chat, though, it seems to work just fine.

Additional smarts include the ability to search for keywords across all conversations and then re-listen to a specific piece of audio by tapping on keywords. Users can help guide Tetra’s AI to create call summaries by manually tagging key moments during a call, and they can share notes with colleagues who weren’t present through the Tetra mobile or web app. 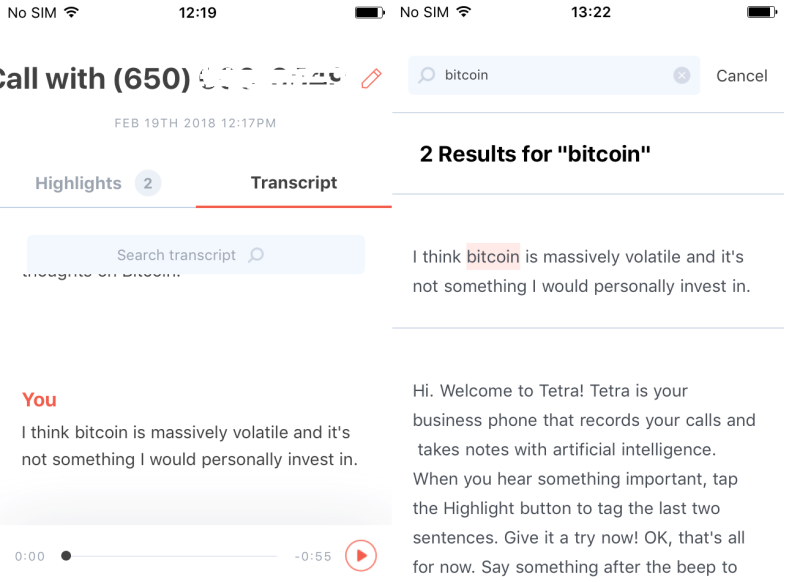 Above: Tetra: Notes and search

In terms of pricing, everyone can get 60 free minutes per month as part of a trial. Then you’ll have to sign up to the Plus, Pro, or Business plans, which offer varying amounts of call-time per month and range from $9 to $99. 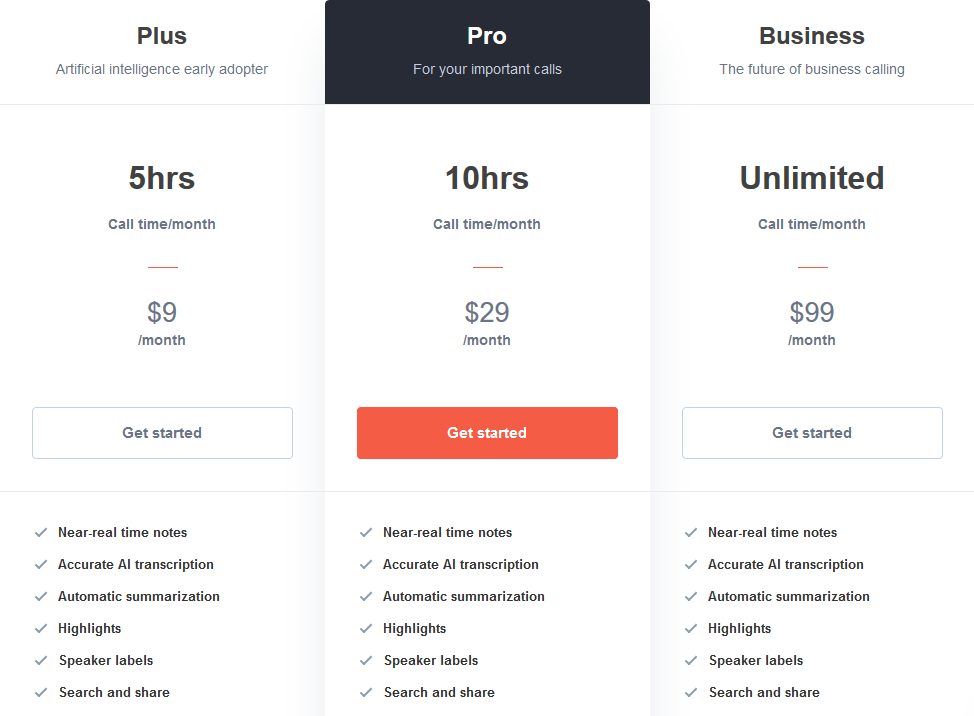 Then there are the legal and ethical angles to consider. By default, Tetra automatically tells the people on the other end of the call that they are being recorded, however it’s possible for the Tetra subscriber to disable this announcement with the proviso that you “stay compliant with local law or get recording consent yourself,” according to Tetra.

Though there is an almost palpable fear regarding what AI will mean for the future of humans, being able to automate boring transcriptions is undoubtedly one benefit that most people will welcome with open arms.

That said, companies with data confidentiality concerns will likely have some reservations about eavesdropping bots listening in on their calls, and the possibility that some content could be made accessible to humans will also be of concern. According to Tetra, it uses “industry standard” encryption and AWS servers to store any data collected. The company also said that “no humans are ever involved” in the creation of the transcripts.

Of course, automated transcription isn’t a new concept. Last year, Zoom announced it was adding automatic transcription smarts to its video conferencing platform, while emerging startups such as Clark.ai and Scopist are setting out to integrate with popular third-party conference calling software to automate note-taking. A startup offering a wearable voice recorder called Senstone raised north of $300,000 through Kickstarter last year to make it easy for you to convert real-world audio into written notes.

There are also existing players in the iPhone app space that record calls and transcribe audio. However, Tetra claims higher levels of transcription accuracy, without human interference and delivered within minutes.

It’s clear there is a big demand for automated transcriptions. While AI transcription won’t be perfect yet, and the app will likely struggle with more technical and nuanced language, it’s already good enough for many use cases. For now, though, Tetra only officially works with U.S. English, though it didn’t seem to have any trouble with my brand of U.K. English, which will actually be officially supported “soon.” Other languages that will soon be supported include Russian, Spanish, Hindi, Japanese, German, Czech, and Polish.

A spokesperson also confirmed to VentureBeat that an Android app is coming within the next few months.

Notable omissions in Tetra’s armory include integrations with third-party tools such as Slack, Skype, and GoToMeeting, though the company’s FAQ answer to whether it works with such communication platforms is “not yet,” which suggests Tetra is open to the possibility.

Still, it’s very early days for the company. Tetra only launched its app in October and has a team of just five. One of the benefits of using off-the-shelf APIs for its AI is that it doesn’t have to reinvent the wheel and can streamline its operations as it seeks growth.