Google passed Facebook as the top referral traffic driver in 2017 as the search giant doubled down on mobile and the social giant cleaned up its News Feed. That move resulted in an even bigger change last year: Search overtook social in 2017, after the two first swapped spots in 2013. The chart above shows this best, detailing the quarterly share of visits for six search engines and the top 13 social networks.

The findings come from social discovery and sharing platform Shareaholic, which today released a report covering referral traffic data for 2017. The platform tracks over 400 million users visiting its network of over 250,000 mobile and desktop sites. Before we dive deeper into the numbers, some quick methodology:

The data reveals “share of visits,” a percentage of overall traffic — direct traffic, social referrals, organic search, paid search, etc. We source data from a network of opt-in websites that utilize our content marketing and publishing tools. These sites include a diversity of categories (e.g. food, tech, design, fashion and beauty, marketing, sports, parenting, religion, general news, and many more), with sites ranging from independent blogs to publishing companies to commerce sites. The size of websites in the study varies from less than 1,000 monthly unique visitors to over 1 million. Rather than working with a static list, we take advantage of an expanding data set as we integrate with new sites.

For the past few years, site visitors were more likely to be referred from social posts than search results. Search made a comeback in 2017, however, driving 34.8 percent of site visits, compared to 25.6 percent from social.

Search did not gain by ignoring social, but rather by embracing it. Search engines are indexing more and more social content, not just considering it for ranking purposes, but including it directly in search results. Users thus do not have to depend on search features in social networks and can continue to rely on their favorite search engine.

For most people, that means Google:

Notice that although Google gained the most share, all search engines were up in 2017. Social’s decline left plenty of room for search growth across the board.

Shareaholic unsurprisingly predicts search will be the largest traffic driver in 2018. The company also points out that the lack of fragmentation in the space “makes the return on your efforts even more apparent as you only need to focus on one or two platforms.” 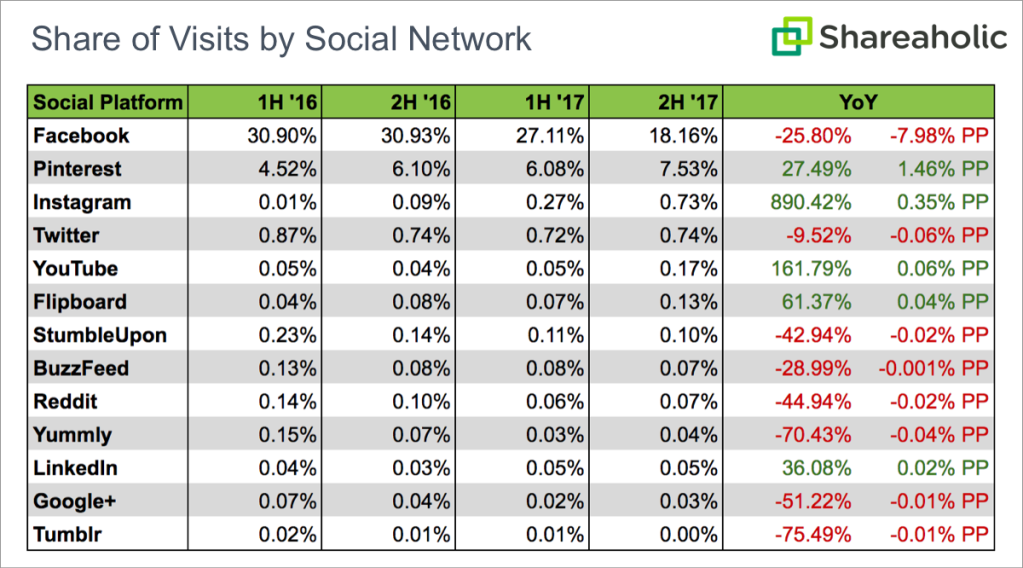 Still, notice that Instagram is very close to overtaking Twitter. While Facebook still deserves the majority of your attention when it comes to social investment, Pinterest and Instagram are worth considering as ways to grow your audience. Both focus heavily on image-related content, so you’ll need to make sure your imagery is shareable.

Those following the news closely will not be surprised by Shareaholic’s findings. Facebook is driving less traffic to websites, and the competition is mobilizing to compensate.

These results are in line with the latest data from Google Analytics alternatives Chartbeat and Parse.ly. Both have found that Google has been steadily replacing the traffic publishers are losing from Facebook.

Does this mean sites should give up on social, or just Facebook, and focus all their efforts on Google? No.

Even better, you should focus on search overall, plus all the social networks that make sense for your site.