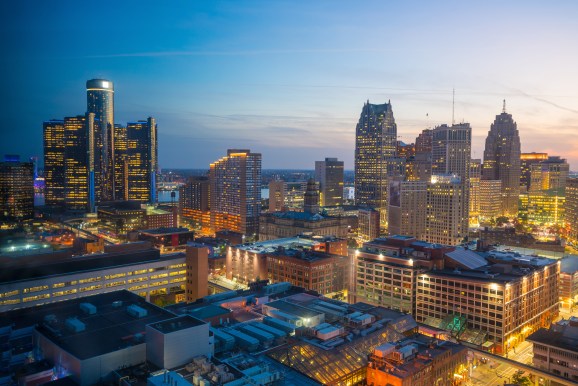 As tech executives call for state education programs to do a better job of providing STEM education, states are jockeying to show that they are attuned to the industry’s needs.

This week, Michigan’s Republican governor Rick Snyder unveiled what he calls the “Marshall Plan for Talent” — a $100 million, five-year investment to restructure Michigan’s education system to do a better job of preparing students for the tech fields that are positioned to have the most job openings. The program will incentivize school districts and universities to offer more work-based learning programs, through both state grants and bringing on private sector businesses as partners.

States launch talent development programs every year to little fanfare. So Gov. Snyder is taking on some risk by setting ambitious expectations for his state’s program — the original Marshall Plan was a $130 billion investment from the U.S. to help rebuild Europe after World War II that’s now frequently cited in history textbooks. But he believes the Marshall Plan can serve as a nationwide example for how states should be educating their students in the digital age, when so few states are ill-equipped to do so.

“This talent gap has been a huge problem everywhere, so let’s be the best at solving it because it will be a great economic engine for Michigan and good for our nation,” he told VentureBeat in a phone interview.

Gov. Snyder’s term ends in 2018, and term limits make him ineligible for re-election. How transformative the talent development program will truly be is up for debate. But many of the pillars of the plan echo some of the most popular ideas being currently being discussed in tech education.

Learning on and for the job

Portions of the talent development program were first uncovered as part of the city of Detroit’s unsuccessful bid to land Amazon HQ2, alongside the Canadian city of Windsor. Gov. Snyder, a former venture capitalist, told VentureBeat that representatives from Amazon did express concerns about the state’s ability to provide talent.

“I think the whole Amazon headquarters process was a helpful catalyst to really make sure our citizens can appreciate what we need to to to address this question [of how to train talent],” Gov. Snyder said.

The most concrete goal of the Marshall Plan for Talent is to ensure that Michiganders have the skills needed to fill a projected 811,055 statewide job openings through 2024 in five industries — information technology and computer science; manufacturing; health care; professional trades; and other business services jobs like financial managers and market researchers.

The way Gov. Snyder sees it, most degrees are awarded based upon “how many classes you attend and how many credit hours you took” — and the classes themselves don’t do a good enough job of giving the students the skills they need to land a job. In competency-based learning programs, students will have to pass a certification test or demonstrate the skills they’ve learned in a practical setting, like the workplace at the end of their program.

This is necessary not only to help students land a job, but also to help them prepare for a future where more of an emphasis will be placed on life-long learning, and workers will have to earn more certificates at different points in their career. One way to do so is through apprenticeships, which have received support from President Donald Trump.

This line of thinking is one that has been echoed by some in tech, most notably Google CEO Sundar Pichai.

“Twenty, thirty years ago — you educated yourself, and that carried you through for the rest of your life. That’s not going to be true for the generation which is being born now. They have to learn continuously over their lives — we know that, so we have to transform how we do education,” Pichai said told MSNBC and Recode last month.

Of the $100 million being doled out by the Marshall Plan for Talent, $50 million will go toward the creation of new educational programs and grants that will help schools transition to this new type of educational model. For example, grants will be provided to K-12 schools that work alongside businesses to develop new classes and make curriculum adjustments, as well as to purchase new technical equipment that the state hopes will be matched by the private sector.

A number of other states, such as Utah, are also placing a greater emphasis on turning to public-private partnerships to develop curriculum. Utah launched an IT Pathway Program in 2017 to kickstart a discussion between the tech community and educators about how to improve STEM education.

The governor’s plan also proposes $25 million toward the creation of scholarships for low-income residents — including those that can assist with other obstacles to education, like lack of access to transportation and child care. $20 million will go toward creating marketing and educational campaigns promoting career opportunities in the state of Michigan, and $5 million will go toward providing incentives for current teachers to receive training in areas that are currently understaffed, as well as finding ways to train career experts to become teachers.

Piloting the future of work

The Marshall Plan for Talent still needs to be approved by the state legislature along with the rest of Gov. Snyder’s 2019 budget. The governor’s website states that the plan will be paid for via bond refinancing.

Mark Muro, a senior fellow at the Brookings Institution, told VentureBeat that the $100 million allocation essentially amounts to “a line item” in the state budget. He views the Marshall Plan for Talent as more of a pilot than a one-time investment.

“Tech really lends itself to work-based learning. The question is that work-based learning clearly requires a lot of organization and a large number of employers who want to go down that path. So there’s both an organizing issue — who is going to set up and organize all of this? — and are these companies ready to embark on this?” Muro told VentureBeat.

The governor’s office cited existing partnerships with Microsoft’s TEALS program and Cisco — which runs a program in Michigan that offers IT courses that can be transferred to other state universities — as indicative of the level of interest the private sector has in working with schools.

Muro also noted that working with private companies might provoke fears of excessive market concentration — bigger companies will likely lobby to ensure their needs are met the most — so the state should also consider working with STEM nonprofits to develop curriculum.

In transitioning to this new model of competency-based learning, Michigan will face the same challenges as those traditionally faced by public universities and K-12 schools: ensuring that all students across the state will have access to the same resources, not just students in the wealthiest school districts or bigger cities; finding ways to lower the cost of education; and ensuring adequate access to the right teachers.

Michigan, like other states, faces a teacher shortage — the number of initial teaching certificates issued in Michigan each year has fallen from 6,077 in in 1996 to 3,696 in 2016, as spending for K-12 funding has seen its ups and downs in the state, particularly during the recession. “As I meet high school students who are coming up into the college level, there’s a very distinct level in skill sets based upon what was available at that high school that these students are coming from,” Tom Brady, a Michigan native and the CTO and cofounder of Ann Arbor-based drone inspection company SkySpecs, told VentureBeat.

Many of the most well-known tech startups in Michigan — such as Duo Security, currently the state’s only unicorn — are located in Ann Arbor, close to the University of Michigan, which they say has provided a healthy pipeline of engineering graduates. Brady, who founded SkySpecs in 2012, says that finding software developers is still difficult.

Another metric that the Marshall Plan for Talent will likely be judged on is: Can it provide enough talent as the state’s fast-growing tech startups continue to scale (SkySpecs currently has 23 employees) and successfully place students outside of Ann Arbor and Detroit, currently the city’s two biggest hubs for tech.

For Michigan, ensuring that its students are prepared for the economic distribution of the future holds a particular level of importance. As the auto industry was decimated starting in the early 2000s, the state lost jobs every year for nearly 10 years, before a turnaround starting in 2011.

“It [The Marshall Plan] was a one-time investment over a number of years that was a catalyst for fundamental transformation. And that’s what this is … we’re doing well as a state, [but] we had really difficult times,” Gov. Snyder told VentureBeat.