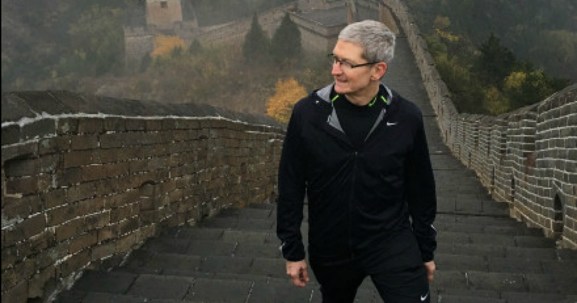 Apple CEO Tim Cook will co-chair the 18th annual China Development Forum, a Chinese government event held in Beijing from March 18-20, according to a Wall Street Journal report this morning. The announcement of Cook’s role in the event comes only months after U.S. senators accused Apple of “enabling the Chinese government’s censorship and surveillance of the internet,” and two days before Apple hands over Chinese iCloud accounts to a Chinese government-controlled company.

Billed by the WSJ as the “Chinese government’s showcase global business forum,” the China Development Forum is annually co-chaired by one Chinese and one foreign business leader and enables Western corporations to improve relationships with Chinese government officials. Cook spoke gingerly at last year’s Forum, gently suggesting that China should further open itself to the world and stating his belief that individuals should be able to own and control their own data. He has made increasingly frequent visits to the country over the past two years.

In contrast to Apple’s bold public proclamations regarding users’ privacy and security rights — including tense face-offs with U.S. officials over unlocking iPhones — the company has repeatedly complied with Chinese government demands that impact customers in the country. Last July, Apple removed virtual private network (VPN) applications from China’s version of the App Store, preventing Chinese users from using iOS apps to view content that lacks Chinese government approval. This month, Apple will turn over Chinese iCloud accounts and security keys to a government-controlled company, leading the Hong Kong Free Press to claim Apple is “paving the way to a ‘cloud dictatorship’ in China.”

Cook has maintained that engaging with the Chinese government is more beneficial than fighting it. “My hope over time is that some of the things, the couple of things [that’ve] been pulled, come back,” Cook said, after removing VPN apps from China’s App Store. “I have great hope on that and great optimism on that.”

Despite Cook’s sunny outlook, U.S. lawmakers have criticized Apple for bending to Chinese demands. Last October, senators Patrick Leahy and Ted Cruz sent a bipartisan letter to Apple enumerating various acts of content censorship Apple had carried out at China’s bidding, including removing the New York Times‘ app from the App Store, shutting down its book and movie stores in China, and pulling VPN apps from the country. In December, Senator Marco Rubio called Apple “so desperate to have access to the Chinese marketplace that they are willing to follow the laws of that country, even if those laws run counter to what those companies’ own standards are supposed to be.”

Additionally, concerns over China’s government gaining access to both data and data networks are at an all-time high. U.S. lawmakers and security agencies have recently worked publicly to stop Chinese mobile companies Huawei and ZTE from selling cellular hardware in the U.S., claiming that the companies are quietly working on behalf of the Chinese government. Two U.S. security chiefs went further last week, lobbying Australia’s prime minister to block the Chinese companies from involvement in upcoming 5G networks.

It’s unclear whether Cook will use the event as an opportunity to speak more strongly to values espoused by Apple and the U.S. or will just use his position to lobby Chinese officials for more opportunities in the country. For years, Apple has manufactured almost all of its products in China, taking advantage of working conditions unthinkable in the U.S., and the company has recently has been successfully selling its products to a growing Chinese elite.