While customers in the U.S. may be indifferent to the new iPhone 8, China appears to be a different story. As a result, Apple saw its first increase in smartphone sales in that critical market after an 18-month losing streak.

According to a report from Canalys, sales of iPhones rebounded this quarter, growing 40 percent to 11 million from 8 million for the same period a year ago. The research firm noted that Apple had posted year-over-year declines in iPhone sales for the Chinese market over the previous six quarters.

Canalys attributed the turnaround to the iPhone 8. It said the new version accounted for a higher proportion of sales this year than the iPhone 7 series did at the same point last year. In the U.S., reports have indicated that the iPhone 7 remains more popular with shoppers so far. 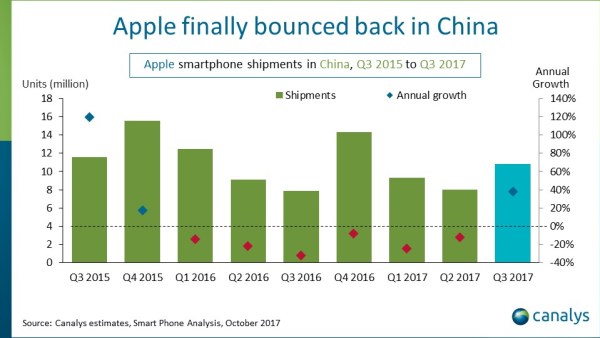 The news is a hopeful sign for Apple, which once saw the Chinese market as a massive engine of growth. Over the past two years, Apple sales have stalled there despite big investments in the region. Instead, local brands that sell Android-based smartphones have dominated sales growth in China.

Canalys remains bearish overall about Apple’s prospects in China. The firm isn’t convinced Apple can sustain this new momentum and said price cuts to older models have helped temporarily. But while there is keen interest in the iPhone X, the high costs and limited supply means it won’t be a big factor in sales for this current holiday quarter.

“Apple’s growth this quarter is only temporary. The high sell-in caters to the pent-up demand of iPhone upgraders in the absence of the iPhone X. Price cuts on earlier models after announcing the iPhone 8 have also helped. However, Apple is unlikely to sustain this growth in Q4,” said Canalys research analyst Mo Jia in statement.

Just as problematic is that the overall Chinese handset market is weakening. Canalys reported that Chinese smartphone shipments fell 5 percent to 119 million units in Q3 2017.

In terms of market share in China, the three top brands are Huawei (19 percent), Oppo (18 percent), and Vivo (17 percent). Huawei saw an increase of 23 percent to 22 million units, emphasizing just how far behind Apple has fallen. Oppo shipped 21 million, and Vivo sold 20 million.