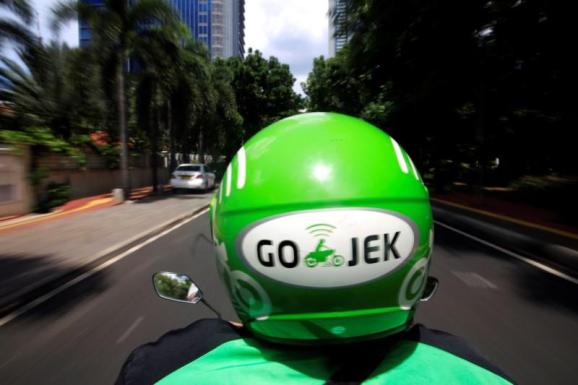 A Go-Jek driver rides a motorcycle on a street in Jakarta, Indonesia, December 15, 2017.

(Reuters) — Indonesia’s Go-Jek has raised a higher than targeted $1.5 billion in a fundraising round from a dozen investors including BlackRock and Google, sources said, as the ride-hailing firm builds its war chest to fight deep-pocketed rivals.

Go-Jek had planned last year to raise $1.2 billion, and, with the 25 percent extra funds it has received, it is now valued at about $5 billion, according to the sources.

The additional funds and backing of well-known investors including Singapore’s Temasek Holdings and Chinese technology giant Tencent Holdings will help Go-Jek to better compete in Southeast Asia’s cut-throat market where incentives to drivers and passengers are used to build loyalty.

Singapore-based Grab was expected to have raised $2.5 billion last year and Uber Technologies has pledged to invest aggressively in Southeast Asia — home to 640 million people — even though the U.S. firm expects to lose money in the fast growing market due to costly battles with rivals.

Both companies are expanding in Indonesia, Southeast Asia’s most populous country, where Go-Jek, a play on the local word for motorbike taxis, is transforming the local economy, economists say.

Go-Jek and Grab are also investing heavily in expanding their mobile payments platform.

“That’s also the key value that its key investors like Google and Tencent see. They know well about the power of the digital ecosystem, and Go-Jek has built it in Indonesia, like Google in the U.S. and WeChat in China,” Wang said.

Go-Jek told Reuters that some investments that came in this year were part of the funding round that kicked off last year but it declined to comment on the amount raised or the names of investors.

It said the funding was aimed at developing technology for micro, small and medium enterprises in Indonesia.

Go-Jek delivers everything from meals and groceries to cleaners, masseuses and hairdressers across Indonesia’s capital city Jakarta, all at the touch of a smartphone app — helping it become a crucial workaround in a city with some of the worst traffic in the world.

Sources said BlackRock and Temasek are investing about $100 million each in Go-Jek’s latest fundraising.

BlackRock declined to comment. A Temasek spokesman confirmed participation in the fundraising but declined to say how much it had invested.

Go-Jek’s payment system, known as Go-Pay, has emerged as one of the most popular mobile payment platforms in Indonesia. Grab, which bought Indonesian payment service Kudo last year, also sees its future in mobile payments as much as in transport.

Go-Jek is expanding in other Indonesian cities and has said it plans to start operations in the Philippines this year, followed by other Southeast Asian countries.