As demand for wearable electronics continues to grow, Apple has taken a decisive lead away from rivals Fitbit and Xiaomi, IDC reports today. Apple dominated the wearables market during 2017’s holiday quarter with a 21 percent market share and led the category for the year with a narrower but still solid 15.3 percent share.

Apple’s wearable leadership in 2017 is a major step up from 2016, when the company had less than half of then-leader Fitbit’s 22.5 million shipments, and 5 million fewer than Xiaomi. At the time, Xiaomi’s wearable shipments were growing much faster than Apple’s, but that turned around in 2017.

Thanks to strong sales of the Apple Watch Series 3 and a comparatively weak holiday quarter for Fitbit, Apple shipped 8 million units worldwide to Fitbit’s 5.4 million, with Xiaomi at 4.9 million. For the year, Apple shipped 17.7 million units to number two Xiaomi’s 15.7 and Fitbit’s 15.4 million. IDC said that the 1 percent or less difference between Xiaomi’s and Fitbit’s numbers made them a statistical tie for second place.

Collectively, 37.9 million wearables were shipped in the 2017 holiday quarter, up 7.7 percent over the 2016 quarter. All five of the top companies in the space shipped over 1.5 million units, although, once again, the Others category was the largest — for both the quarter and the year, with 15.6 million shipments in the quarter and 55.5 million for 2017. This means over 40 percent of wearable shipments continue to come from smaller players, though the number is falling as larger brands — particularly Apple — continue to grow. 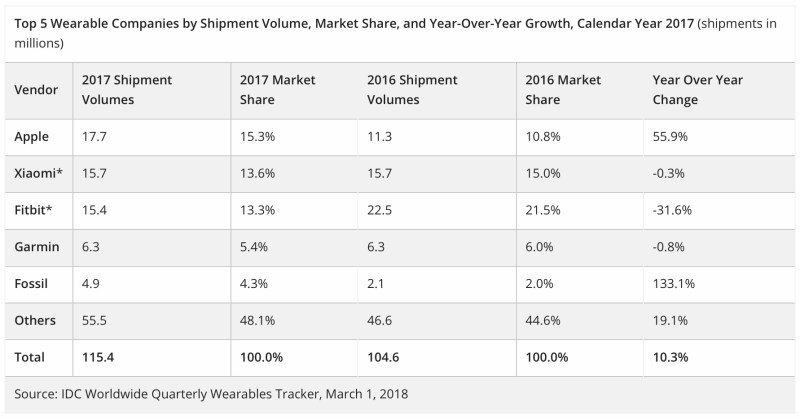 Apple’s overall strength for the year was largely the result of its holiday performance, as IDC pointed out that “4Q17 was the first quarter that Apple held the market leader position all to itself after spending several quarters close behind Fitbit or Xiaomi.” The firm suggested Apple was picking up upgraders from basic wearables, as well as people interested in the Apple Watch Series 3’s cellular connectivity.

IDC noted that Huawei had the largest growth in the top five, though its focus on China has been “somewhat detrimental,” as the brand receded slightly on the world stage. Similarly, though Xiaomi’s shipments have been fairly steady, the company predominantly sells to Chinese customers, with under 15 percent of shipments going outside the country.

The firm was positive on Fitbit, noting that while its shipments were down, the company has been deepening its health care reach and setting the stage for future growth. It also characterized Garmin’s slight increase as attributable more to fast growth in its smartwatches than to its basic fitness trackers. Interestingly, it had nothing to say on Fossil, which was the fifth-ranked wearables vendor for the year but not a leader for the quarter.