(Reuters) — Apple, the world’s most valuable publicly listed company, is in danger of being beaten by Amazon.com to the $1 trillion mark.

Wall Street’s optimism about last year’s 10th anniversary iPhone had propelled Apple’s stock 24 percent higher over the past 12 months, giving it a market capitalization of $893 billion.

That is $141 billion more than the $752 billion market value of Amazon, the world’s second most valuable publicly listed company, but Amazon has been closing the gap. 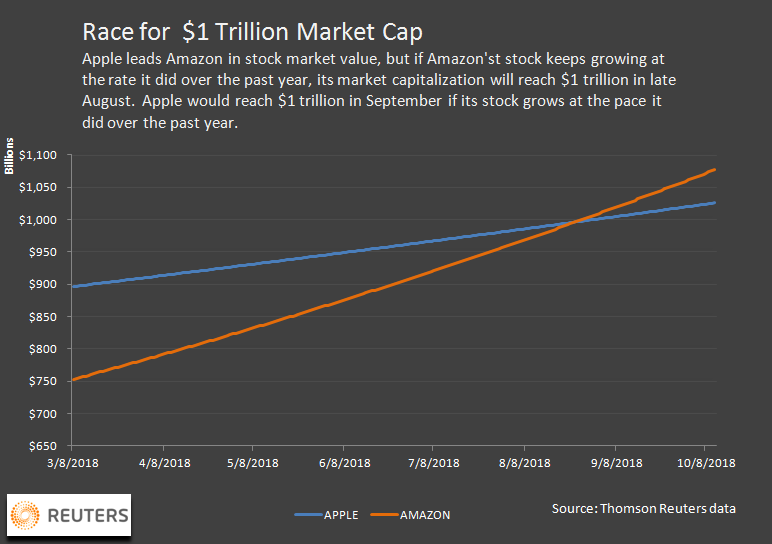 Amazon’s stock has surged 83 percent over the past year, bolstered by scorchingly fast revenue growth as more shopping moves online and businesses shift their computing operations to the cloud, where Amazon Web Services leads the market.

In January, Amazon announced that it, Berkshire Hathaway and JPMorgan Chase & Co would form a company to cut health care costs for their employees, which was widely seen as a threat to the existing U.S. health care system and underscored Amazon’s ability to disrupt markets.

Amazon dislodged Microsoft as the No. 2 U.S. company by market capitalization in February.

Meanwhile, optimism about Apple’s iPhone X has given way to concerns that demand for the $1,000 device may be weaker than expected.

To be sure, past stock gains are not a reliable predictor of future performance, and the surge in Amazon shares in recent years has been exceptional by most standards.

Most Wall Street analysts are not quite that enthusiastic. Analysts on average expect Apple’s stock price to rise 11 percent and reach $195 within the next 12 months, which would put its market capitalization at $989 billion, according to Thomson Reuters data.

Analysts covering Amazon on average expect its stock to rise 10 percent within the next year to reach $1,700, which would give it a market value of $823 billion.