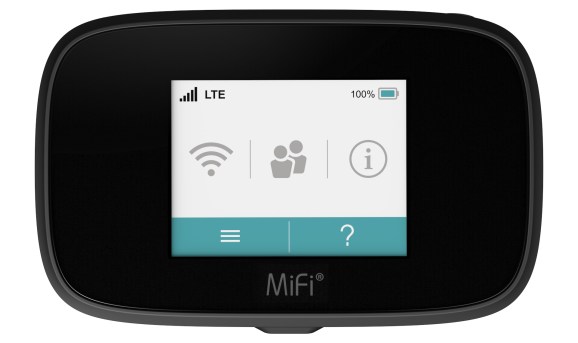 If you don’t recognize the name Inseego, that’s probably because the company’s popular wireless hotspots and home modems have been sold for years under the MiFi and Novatel names. Back when Verizon was rolling out the first 4G/LTE network, I relied on a MiFi to give my laptop, tablet, and 3G phone considerably faster data speeds when I was traveling on business.

Now history’s set to repeat itself as Verizon and AT&T plan early 5G network launches for 2018, with Inseego devices likely to be amongst the very first options for home and mobile 5G service. I spoke with Inseego CEO Dan Mondor and CMO Ashish Sharma to learn what we can expect from the first consumer 5G devices, and this quote from Dan Mondor sums up the discussion neatly:

“I can’t put enough supers: super-super-super exciting. This is the first true mobile broadband wireless technology. What it can do, not only on the consumer side of things, but also industrial IoT applications, with the bandwidth and ultra-low latency … Think about autonomous vehicles and other such applications. Throughput alone isn’t the determining factor.”

Fast speeds, incredible responsiveness, and wireless devices everywhere are going to be the hallmarks of 5G as it spreads across the world.

VentureBeat: So where is Inseego in the 5G hardware development process? You’re going to be using Qualcomm X50 chips, right?

Dan Mondor: It’s real, it’s happening, and we’re going to participate in some of the initial commercial trials this year. We’d certainly expect to see it ramp up in 2019.

5G’s a freight train: It’s very big and moving very fast. We do have the technical competency at Inseego, having really done every first generation of the new standard technologies — 2G, 3G, 4G. So we have incredible RF, antenna, and modem technology capability, and we have a very close partnership with Qualcomm, who are literally across the street from us. We’re [working] engineer-to-engineer [with them] as the technology’s being rolled out.

We’re going to be introducing both a fixed modem — home gateway router product with 5G — as well as a mobile technology. I dislike the term “hotspot,” but we’ll go with that.

Ashish Sharma: We’ll cover all the different bands. We’re starting out with the more commonly accepted bands, and that does cover millimeter wave. But as the spectrum gets allocated and our customers finalize their band requirements, we’re looking to have a solution that covers all the key global bands. We’re still evaluating what goes into the solution from a sub-6Ghz band, but there will be a mix of both.

VentureBeat: If you’re setting up a 5G modem in a home, are there any concerns about antenna positioning and strength? Will your hardware be only inside, or outside?

Mondor: There are two options. One is an entirely in-home solution, with a very pleasing, compact form factor, CP (customer premises) device, as well as antenna, and the other is essentially just a slight modification on top of a bracket for outside-the-home mounting.

VentureBeat: How’s it going to compare to a FIOS install, visually?

Mondor: You might be imagining something a little more inelegant and large than what our design is. The CP device, you might think of as a large soup can size. And the antenna doesn’t look like a dead spider upside down. Think of a very elegant full-form factor that might be two large soup cans in height on end. It’s not a beast.

We’ve been asked to do it in white, so it fits with contemporary home decor. Don’t picture some ugly hot water tank-looking thing. Think of rounded lines, not squares and sharp angles. It’s very rounded, something you could easily put on your bookshelf. It’s not some nasty thing.

Sharma: It’s a totally new design. This is where our expertise comes in, in how to not make people run all sorts of cables in the house, how to make it work well with inside and outside pieces potentially, and with powerful integrated Wi-Fi that gives us great coverage indoors.

This will be a complete solution with integrated VoLTE, as well. One solution gives you voice and high-speed data, and you can connect lots of devices suddenly in the house.

There are a couple of different form factors — that’s stuff we’re still working through with our customers. There could be one integrated piece if signal is great in your home, and there could be a split architecture (antenna and modem) based on how the coverage is where you live.

VentureBeat: What should customers expect from 5G performance? Any minimum speed or latency?

Sharma: To be honest, that is still being worked out [on the carrier side]. It will be significantly more than what LTE is able to offer today. And [carriers will be] bringing a lot of the big pipe to the edge and also reducing the latency.

VentureBeat: What will customers have to pay for the hardware? Will it be free with service, or a standalone expense?

Mondor: That would really be the operator/service provider’s call. We wouldn’t really have a say in what they intend to do, and it would be their news to discuss.

VentureBeat: Let’s focus on mobile 5G, which AT&T has announced it will offer this year with mobile hotspots. What’s the current status of a 5G MiFi?

Sharma: We’re already actively working on that. I think the handsets will take time, because trying to get within a handset form factor is more work. And the initial target of potentially by the end of this year, beginning of next year, is on getting a mobile hotspot to the market with a 4G fallback built into that. We’re actively working on figuring out with our customers and with our partners which bands and which geographies and which carriers we need to ensure we include in that first version of the hotspot we bring to market.

Mondor: If you have a brand spanking new 5G smartphone, you’re going to want to have it everywhere, full coverage, get on an airplane and fly to a different city. That spells a complete cellular network, whereas starting with target markets with fixed [5G], you can stand that up and it’s not a ubiquitous nationwide coast-to-coast type of network that necessarily has to be put in place. So I think you’re going to see the availability of the smartphone handsets, that’s not going to be the hurdle. It’s going to be standing up the full mobile 5G network. So I see fixed [happening] first.

VentureBeat: We heard that there may be antenna attenuation issues with smartphones and hotspots due to 5G’s use of millimeter wave radio signals — are you seeing that kind of issue?

Mondor: Our antenna design facility has multiple anachoic chambers, shielded cages — it actually is a facility unto itself, off of our main R&D lab, that third parties come in to test their antenna prototypes. There is a black art to it. One of our advantages is that we can rapid prototype: look at a prototype design, 3-D print, put an antenna on in an arbitrary shape, go in this complete chamber and check it out, look at signal strength from a 360-degree point of view, come back, and modify the design, in minutes.

VentureBeat: So have you figured out a solution?

Mondor: It is a black art, and not that I like to say negative things about our competitors, but if you look at our design on 4G hotspots and look at other companies … ours is basically a puck. And to get it actually puck-sized, there’s deep science in that. And if you look at the current form factor on our current generation, it’s really about that size. And therefore it’s a barrier to entry, it’s not a small hurdle if you don’t have the antenna/RF design expertise.

VentureBeat: What about battery performance? Your current top mobile hotspot has 24-hour battery life for 4G.

Ashish: That’s something we’re working out right now, and we have a number of design methodologies we’re applying to it. And yes, the size of the puck could become a little bigger, the size of the battery could become a little bigger, but we understand what consumers and enterprise customers expect from this hotspot. So our goal is to give them … it can’t be an hour battery life, it has to be something really reasonable, and that’s what we’re driving toward.

VentureBeat: If that’s too early to say, and the tradeoffs are theoretical, how far are we actually out from seeing your hardware? AT&T and Verizon are supposed to be launching 5G later this year.

Mondor: We’re past the theoretical discussion. This is literally the design and the design tradeoffs, relative to the technology, and the physical form factor. So it’s past science and now into hardcore development. The project’s underway.

VentureBeat: Will you have hardware in time for Verizon’s initial 5G deployments, or will you be in the second wave?

Mondor: We’re part of the first wave. And we absolutely feel no pressure at all, we’re not working around the clock (joking). Actually, we’re on the leading edge, and that’s what the teams are working through 24-7 now to hit the target launch date. So we’ve been selected to be in the first wave.

Mondor: They’re going to look at different designs. Just as a matter of procurement policy, they really don’t do exclusive deals. And quite frankly, we don’t want exclusives, because we want to be able to sell our technology to other service providers. So there’s rarely if ever exclusive arrangements for these.