Female representation in tech is low, and it’s not changing.

What’s interesting, though, is it’s not for lack of community support or inclusion programs. The same report shows that startups that have implemented inclusion programs increased from 25 percent to 41 percent over the past year, and my own research shows that organizations supporting diversity in tech are growing, especially in the Midwest.

We’re also not truly seeing a pipeline problem — women-led businesses are experiencing one of the fastest rates of growth among any segment of business owners, but the number of women-founded startups receiving funding is only 2 percent.

Many of those founders went on to say that the lack of female representation in venture capital decreased their odds of getting funded.

For one, it’s harder for female founders to get access to male VCs because their networks don’t often overlap. While venture firms employ a variety of sourcing techniques, they vary widely, and the industry still largely relies on warm connections, referrals, and networks to find investment opportunities. 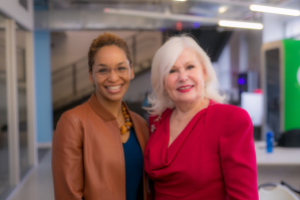 Additionally, female entrepreneurs often target problems that affect women or touch women-driven markets. Male VCs may not understand these pain points based on their own experiences or expertise, which limits their ability to see a company’s potential success.

This is a problem for female founders because as of 2016, only 7 percent of partners at the top 100 venture firms are women.

For women of color, the numbers are worse. Nationally, there are reportedly only 27 Latina women in VC across role types, including associates, partners, and platform managers.

As one of those 27 Latina women, I see and feel the weight of our underrepresentation. So much that I decided to investigate what female VC representation looks on my home turf: the Midwest.

The Hyde Park Angels team worked to collect and analyze the data on the 140 venture capital firms in the region we define as the Midwest: Illinois, Indiana, Ohio, Michigan, Minnesota, and Wisconsin.

From our analysis, we found 382 women in venture capital in the Midwest, with 69 of them serving as partners.

Of those 382 women, 365 were based in Illinois or working for Illinois-based firms, and 52 of them were partners.

Firms that were founded by women were also more likely to have more female leadership and team members than those that weren’t.

Impact Engine, which originally began as a social impact accelerator but transformed into an impact venture firm under the leadership of managing director Jessica Droste Yagan, is primarily made up of women, who serve at all levels of the organization.

Similarly, InvestHer, an early-stage investment firm that invests in female-founded companies, is headed up by its two female founders, Gerri Kahnweiler and Cayla Weisberg.

“We’ve had nonprofits focusing on women for eons, and it’s still going to take 100 years to close the pay gap. The quickest way we can do this is to get more female funders out there who will back female founders. Once women are empowered enough, they will hire and support women. Once you get that grounding and that foundation around inclusivity, that will sustain itself on its own,” said Monika Black, chief strategy officer at Dymynd Angels.

Black and CEO and cofounder Carolyn Leonard seek to provide education and resources for women to become investors, and then leverage those female investors to fund female entrepreneurs.

For Leonard, founding Dymynd was motivated by her own interest in investing, along with a realization that women did not have access to the traditional networks to either receive or provide investment capital.

“Women want to start investing in other women. It’s about building up both sides, the female funder and the female founder,” said Leonard.

Perhaps the emergence of organizations like Dymynd will pave the way for increased representation in venture capital, starting in Illinois and the greater Midwest.

“This is a time for Chicago to really say we’re doing investing differently. We can set the standard. Other markets are so infiltrated with the traditional, [male-dominated] ways to do investing. The community psychologist in me says go to the community where they can try a new way,” said Black.