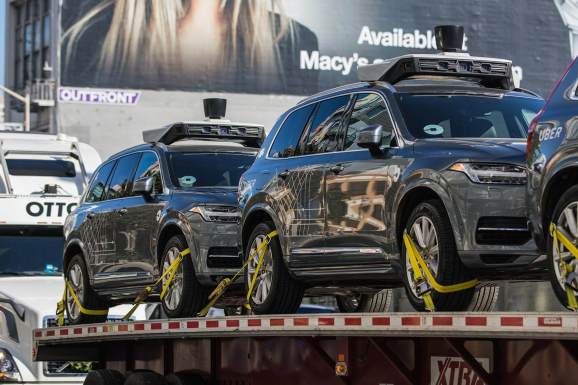 Uber ships its self-driving cars to Arizona after being blocked by California's Department of Motor Vehicles, on December 22, 2016.

Uber has parked its autonomous cars in North America after a crash Sunday night in Tempe, Arizona that killed a female pedestrian. Tempe Police said in a statement provided by Uber that the car was operating in autonomous mode with a human driver when the accident occurred.

Elaine Herzberg was taken from the site of the accident to the hospital, where she died from her injuries. She was 49 years old. According to the police’s statement, she was walking outside of the crosswalk at the time of the crash.

“Our hearts go out to the victim’s family. We are fully cooperating with local authorities in their investigation of this incident,” Uber said in a statement.

There’s still a great deal we don’t know about the accident. It’s unclear what role the driver played in the crash, and how the autonomous vehicle reacted, if at all, to Herzberg’s presence in its path.

This accident could have significant consequences for Uber’s self-driving car ambitions. Herzberg’s death appears to be the first time that a pedestrian was killed by an autonomous vehicle.

It isn’t the first time Uber suspended its autonomous vehicle operations after a crash. Roughly a year ago, the company shut down its self-driving cars after an accident in Tempe that involved another vehicle.

Arizona has made a name for itself as a friendly market for autonomous vehicle testing. A 2015 executive order from governor Doug Ducey called for the creation of a commission that would “facilitate the expanded operation of self-driving vehicles on public roads in Arizona.” Ducey’s past remarks on Uber’s autonomous vehicle plans have focused both on highlighting a lack of regulation while maintaining public safety.

Earlier this month, Ducey signed a new executive order providing additional guidance on safety regulations for autonomous vehicles, including those without drivers. It also empowered the state to issue cease and desist orders to autonomous car operators who do not meet safety rules. It’s unclear how this accident will influence the regulatory regime, if at all. Right now, the governor’s office hasn’t signaled any changes.

“We are aware of the accident this morning,” Patrick Ptak, a senior press secretary and spokesman for the governor said in an emailed statement. “Our prayers are with the victim, and our hearts go out to her family. Our office is in communication with law enforcement. Public safety is our top priority, and the Governor’s latest Executive Order provides enhanced enforcement measures and clarity on responsibility in these accidents.”

Representatives for the Arizona Department of Transportation did not immediately respond to requests for comment on this report.

Correction March 21: This story originally stated that the accident took place Monday morning. According to the Tempe Police, it took place around 10 p.m. Sunday night.