Microsoft today launched its Edge browser for Android tablets and Apple’s iPads. You can download the app now directly from Google Play and Apple’s App Store.

Microsoft launched a preview of Edge for Android and iOS in October and then released the app out of preview in November. That version of the browser, however, only worked on phones. Over the past few months, the company has been testing beta versions for the larger Android and iOS mobile devices. 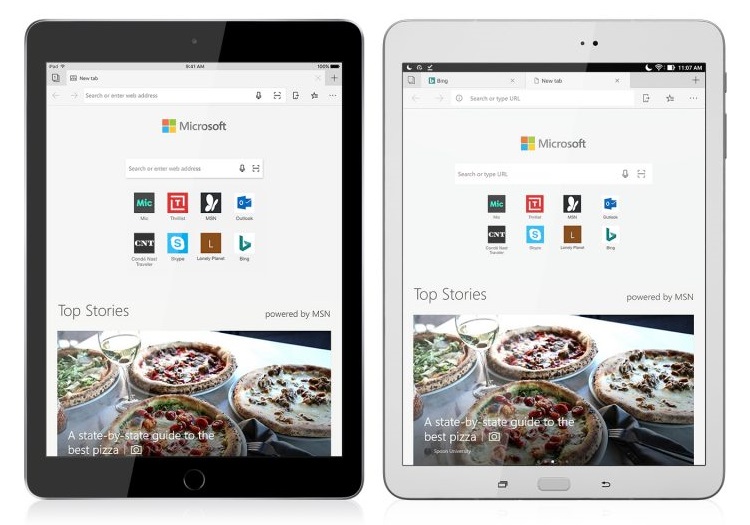 Microsoft made the announcement today in an update to its original November blog post, along with the above image. The news was directed at tablet users:

Now, you too, can experience familiar features like your Favorites (including Roaming Favorites), Reading List, New Tab Page, Reading View, and Roaming Passwords in Microsoft Edge across all of your devices. And, what makes Microsoft Edge really stand out is the ability to continue on your PC, allowing you to open a web page from your phone right on to your PC. We look forward to bringing new features and updates to Microsoft Edge for iOS and Android in future updates, so please keep providing feedback!

Microsoft’s Continue on PC functionality, which lets you send a task from your Android or iOS device to your Windows 10 PC, is one of the features the company hopes will make Edge stand out. Continue on PC requires the Windows 10 Fall Creators Update, which arrived in October.

Continue on PC is cloud-based, meaning it doesn’t send whatever you want to “continue” over Bluetooth or Wi-Fi, but rather it just logs what you’re doing to the Microsoft Graph. As long as you’re logged into your Microsoft Account on both devices, your data will roam with you. This is the main reason why Edge will prompt you to login to your Microsoft Account, although signing in is not required to use the app.