When Brad Ferguson left his home state of Utah to pursue a PhD in statistics at North Carolina State University in 2011, he figured he wouldn’t return. Not because he didn’t want to live in the state — but as a statistician, he didn’t think there were as many career opportunities in Utah as there were in places like Boston, Silicon Valley, and the North Carolina Research Triangle.

At 31, Ferguson is back in Utah, working as a data scientist for Domo, a seven-year-old analytics company valued at $2.3 billion as of its last funding round. The reason he finally decided to move back home?

“If Domo didn’t work out for whatever reason, [I felt] I could find another job really quickly and easily, with all these new businesses coming up,” Ferguson told VentureBeat.

Utah serves as an example to other aspiring tech hubs of what a healthy “talent pipeline” truly looks like. This is an increasingly important piece of the ecosystem puzzle as tech giants like Google and Amazon look outside the Bay Area to meet large hiring goals.

Yes, the number of computer science graduates is important. But if you talk to the executives of various Utah tech startups, you’ll also hear about the need to attract talent from outside the state. And while your city or state might have a few startup success stories — Utah is now home to four startups valued at more than $1 billion — it doesn’t mean that hiring challenges will disappear overnight.

“If we hired every engineer every year that all of the universities in the state put out, which we’re obviously not going to do … that still wouldn’t be enough. And we’re just one company,” Mike Maughan, who heads up Provo, Utah-based Qualtrics’ global insights team, told VentureBeat in a phone interview.

How the Silicon Slopes took shape

Most Utah entrepreneurs, investors, and tech organizations VentureBeat spoke with agreed on one thing — it’s become easier in recent years to recruit talent from outside the state.

Jonathan Rye, who moved to Utah from the Bay Area to work for Domo as its VP of sales operations in November, said he was simply reassured about the area’s prospects by seeing the physical presence of tech companies along Utah’s 1-15 corridor. The highway connects the cities of Provo and Salt Lake City, which make up the area referred to as the Silicon Slopes — home to the highest concentration of tech companies in the state. 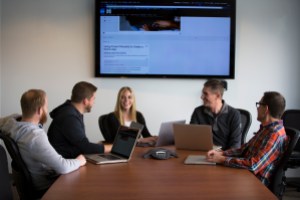 Above: Domo employees at the company’s offices in American Fork, Utah

“You pass all of these tech companies — Proofpoint, Oracle — and I don’t have the feeling that it’s very much just a sprinkling [of tech companies]. There’s a density and critical mass,” Rye told VentureBeat.

Utah produced some successful companies during the dot-com era, including Omniture and Overstock.com. But up until the late 2000s, that wasn’t enough to convince most potential talent that Utah had a thriving tech scene.

Omniture cofounder Josh James started his second company, Domo, in 2011, armed with an influx of cash from the $1.8 billion sale of Omniture to Adobe. Two years later, Qualtrics raised $70 million from investors that included Accel and Sequoia Capital — becoming one of the few Utah companies at the time to attract a Silicon Valley-sized first round of funding.

With that capital from prominent investors, Qualtrics, which develops what it calls “experience management” software, has been able to raise its profile with both entry-level applicants and more experienced executives. In 2016, the company recruited 150 people to Utah, according to Maughan. Among the top universities that Qualtrics now recruits from — in addition to those located in Utah — are places like Princeton University, Northwestern, and University of Michigan.

Qualtrics, which has 1,600 employees, about half of whom are in Utah, has also been able to snag some seasoned executives as it reportedly prepares for an IPO. Those hires include longtime Microsoft executive Julie Larson-Green, who was named chief experience officer in December, and newly appointed chief financial officer David Faugno, who guided Barracuda Networks through its IPO.

As is true in any tech ecosystem, younger startups in Utah feel more of a hiring pinch than older, more established companies like Qualtrics. Eric Rea, the cofounder and CEO of four-year-old startup Podium, said his company relied on remote engineers for the first year and a half.

“When you’re starting out, if you’re in a state that doesn’t have a lot of tech talent, you have so many things against you — number one, you’re a tiny little company, and you’re probably not getting a lot of people to take bets on you,” Rea said. “And on top of that, there’s a shortage. You probably can’t pay as much as the bigger companies around you when you’re first starting out, and sometimes you have to just figure out ways to get around.”

Utah did see the highest percent increase of any state in the number of tech workers from 2016 to 2017, according to an annual report from CompTIA. The number of computer science degrees awarded by its public universities has increased by 130 percent between 2000 and 2015, and 8.6 percent of its state workforce works in tech, compared to 9.1 percent in California.

But with 3 million residents, compared to California’s 39 million, Utah’s talent pool will never match the scale and density of the Bay Area. And large percentage increases in the number of skilled workers or graduates don’t look as impressive when translated into numerical increases. The total number of computer science degrees awarded by Utah’s public universities, for example, only jumped from 513 to 1,181 between 2000 and 2015.

Podium got a huge assist in the hiring department when the company was selected for Y Combinator’s 2016 winter session. Rea says that Podium has seen a significant uptick in out-of-state resumes since then, but finding enough engineers is still challenging, especially with the company in high-growth mode. Podium currently has 264 employees in Utah, and it hopes to grow its headcount to 400 by year’s end.

What can be done

Not every Utah startup can count on a nationally regarded program like Y Combinator to ease their hiring challenges. The question, then, becomes: What should Utah do to get more talent in the state? The answer you get depends on which group you talk to in Utah’s tech community.

Ginger Chinn, managing director for the Utah Governor’s Office of Economic Development, touted the state’s “pathway” programs in a phone conversation with VentureBeat. The programs — including a recently announced IT program — connect the private sector with schools and universities looking to align their curriculum with the skills companies need.

CEOs of Utah’s unicorn companies believe the most important thing they can do is work together to make the state more attractive to tech workers. So once a quarter, top Utah CEOs — Domo’s Josh James, Qualtrics’ Ryan Smith, and Aaron Skonnard, the CEO of another Utah unicorn, Pluralsight — meet to discuss ways to boost the state’s profile.

“We’re trying to build this state to accommodate the next phase of [our] growth so that we can try to do as much of it here as possible,” Smith told VentureBeat. “All of us have the option to go and grow wherever we want to grow.” Qualtrics, Domo, and Pluralsight now have 1,600, 800, and 940 employees, respectively. In Qualtrics’ case, a little more than half of its employees are located in the state, while just over 700 of Domo’s employees work out of its office in American Fork, Utah.

Younger workers want to know that Utah is a fun place to live. So Qualtrics’ website, for example, features a “Why Utah” section that shows employees snowshoeing, rock climbing, cycling, and visiting one of Utah’s national parks and claims that yes, a state that’s 63 percent Mormon has a lively nightlife.

There’s also the challenge of trying to convince tech workers looking for a diverse place to live and work that a state that’s 82 percent white fits the bill. Doing more to recruit female and minority tech employees is a priority, especially for the bigger startups. In September, leading Utah tech companies, including Qualtrics, Domo, and Pluralsight signed a Parity Pledge, promising to interview at least one female candidate for any opening for vice president or above.

If there’s a lesson other states aspiring to build a stronger tech community can take from Utah, it’s that there’s no “magic bullet” when it comes to building a strong talent pool — success requires a multi-pronged approach and consistent backing from the whole community.