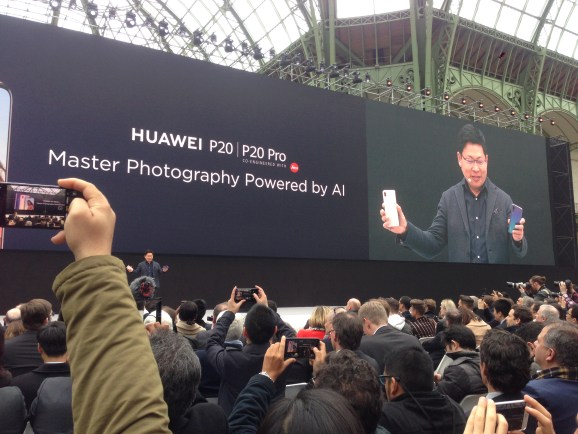 Standing in the picturesque Grand Palais in Paris, Huawei’s Richard Yu didn’t seem like a man worried about the storm of controversy his company is facing in the U.S. The CEO of the Chinese giant’s consumer business instead appeared confident and ready to show consumers just what they’re missing as a result of political pressure to block Huawei’s products in the country.

He noted that Huawei is now ranked sixth in the world on R&D spending, just ahead of Apple and just behind Intel, having spent $12.8 billion (€10.4 billion). The goal is to increase that figure by 20 percent annually, he said. The company is also the world’s No. 3 seller of handsets, despite being shut out of the U.S. market.

Huawei doubled the number of “experience shops” around the world to 3,220 last year, including a gorgeous new store in Milan. And its gadgets are sold in 227,056 retail stores around the planet.

Yu then played a video called “Trust in our global partners” that offered gushing testimonials from executives at European carriers such as France’s Orange, U.K.’s Vodafone, Germany’s Deutsche Telekom, and Spain’s Telefonica. They praised Huawei as being a “leading innovator.”

Trust. It seems everyone trusts Huawei. Except the U.S. and Australia, which banned the company from its National Broadband Network. The U.S. that has been sounding the alarm against the company for several years now. Yet throughout that campaign, Huawei has only grown more successful and more financially sound.

In its annual report released after the Paris event, the company reported that overall revenue jumped 15.7 percent year-over-year while profits increased 28.1 percent. Its carrier business was basically flat, but sales of networking gear to businesses increase 35.1 percent, and its consumer business increased 31.9 percent. More money and more profits equals more investment in R&D and marketing.

Huawei has muscled its way into becoming the world’s largest seller of communications gear, passing Nokia and Ericsson. And is has made aggressive investments in 5G technology, hoping to widen that lead with the next generation of wireless technology.

But the U.S. government is determined to makes sure none of Huawei’s networking and telecom gear lands on American soil. Dating back to Congressional investigations several years ago, politicians have raised concerns over a lack of clarity in Huawei’s relationship with its country’s Communist government. The fear is that Huawei gear will contain undetectable backdoors that allow China to spy on U.S. citizens.

In July 2013, General Michael Hayden, former director of the CIA and NSA, claimed Huawei had “shared with the Chinese state intimate and extensive knowledge of foreign telecommunications systems it is involved with.” The company has also been accused of bribery and of helping China’s military unit. However, as the bill to ban Huawei from the U.S. market from Sen. Tom Cotton shows, much of this remains conjecture and speculation.

To the extent that proof exists, it hasn’t deterred most other countries from embracing Huawei’s products. If Huawei leads the pack with 5G, U.S. carriers will have to settle for working with the also-rans. And as Huawei’s lead increases, the company will attract more customers, more engineers, and more developers who want to work at the leading edge.

5G remains a critical but longer-term issue. Government pressure appears to have caused AT&T to cancel its deal to sell Huawei handsets, and now Best Buy has backed out as well. Those moves come as Huawei unveiled its new MateBook X laptop at Barcelona Mobile Congress and now its new flagship handsets.

I’ve been playing with both devices at home now. And while I don’t claim to be the world’s leading gadget expert, both are remarkable, certainly among the best in class for their relative categories. DxOMark, a noted analyst of image quality products, said the three-camera setup on the Huawei P20 Pro was “arguably the most innovative device we’ve seen in quite some time.” DxOMark gave the P20 Pro camera system its highest rating ever, surpassing Apple’s iPhone X and Samsung’s Galaxy 9.

“With an overall score of 109 points, the Huawei P20 Pro sets a new benchmark for smartphone cameras on DxOMark.com, outscoring all of its closest rivals, such as the Apple iPhone X, the Google Pixel 2, and the Samsung Galaxy S9 Plus by a margin that is close to or higher than 10 points,” reviewers wrote.

For the moment, U.S. consumers can buy unlocked versions of Huawei phones online at full price. But they won’t find them in carriers’ stores, which will no doubt limit sales. Still, Huawei remains the world’s third-largest seller of handsets, behind Apple and Samsung. And in Europe, where the company only entered the market a couple of years ago, it now has about a 13 percent market share, placing it just behind second-place Apple.

With Huawei unlikely to crack the U.S. market anytime soon, it will have to settle for the rest of the world. That may be plenty for the Chinese giant. U.S. consumers, however, will have to hope this doesn’t relegate them to second-class status when its comes to accessing the best consumer electronics and wireless networks.