Work has begun on a new subsea cable system connecting Japan to Australia via Guam, and Google has joined as an investor and key consortium member.

The Japan-Guam-Australia (JGA) cable is a joint project consisting of RTI Connectivity (RTIC), AARNet, and Google, with NEC and Alcatel Submarine Networks responsible for carrying out the work. The 9,500 km (6,000 mile) fiber optic cable is expected to be completed by late 2019 and will deliver a capacity of around 36 terabits per second (Tbps).

Google announced in January that it would be expanding its cloud infrastructure with five new cloud regions and three new subsea cables. The cables are to be commissioned in 2019 and will run from Chile to Los Angeles, the U.S. to Denmark and Ireland, and Hong Kong to Guam. These will eventually build upon Google’s existing cable systems, which the company has invested in across the Asia-Pacific (APAC) region, including Unity, Faster, and PLCN. The latter is a joint project with Facebook to connect Los Angeles and Hong Kong and is expected to be operational this year. The internet giant is investing in a number of other subsea cable systems, including Indigo, which will connect parts of Asia with Australia.

Ultimately, what Google wants is a far-reaching network of interconnected cables capable of transferring data between its servers and millions of users globally. 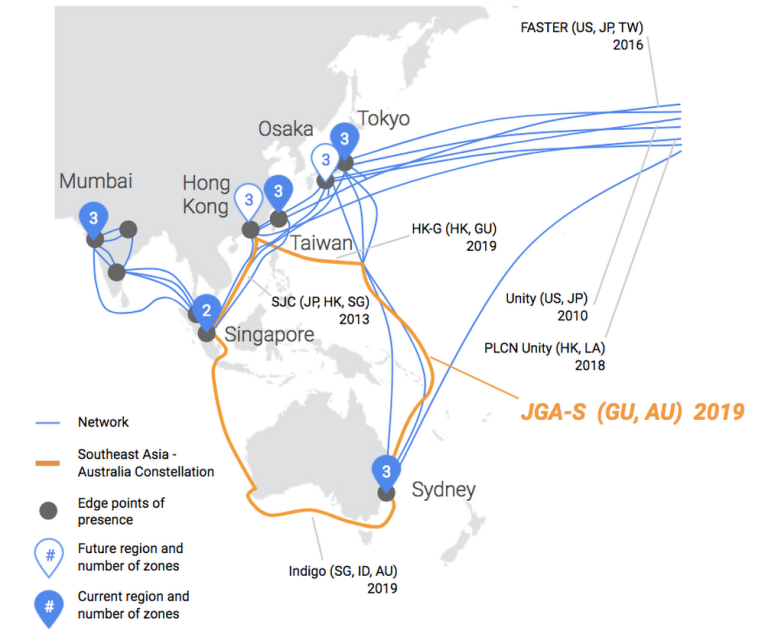 “Whether we’re delivering directions to Maps users, videos to YouTube viewers, or GCP services to businesses, we know a fast and reliable infrastructure makes all the difference,” noted Michael D. Francois from Google’s global network infrastructure unit, in a blog post. “That’s why we continue to invest in strategic routes, many of which require crossing oceans.”

The JGA project will entail building two fiber pairs that connect Japan to Guam (JGA-North), and a further two fiber pairs linking Guam to Sydney (JGA-South). It’s the southern segment that Google is directly developing as part of the consortium. That segment will link with the South-East Asia Japan Cable (SJC) system that Google has previously invested in and which connects Japan, Hong Kong, and Singapore, and it will feed into the Indigo network that links Singapore, Indonesia, and Australia.

Other U.S. technology firms have also been investing heavily in subsea fibre optic cabling to improve their respective services. Back in September, we saw the completion of Microsoft and Facebook’s 4,000-mile transatlantic internet cable Marea, which runs from Virginia in the U.S. all the way to Bilbao in Spain. SoftBank, Facebook, and Amazon also recently committed to creating a 8,700-mile transpacific subsea cable system that connects Asia with North America.