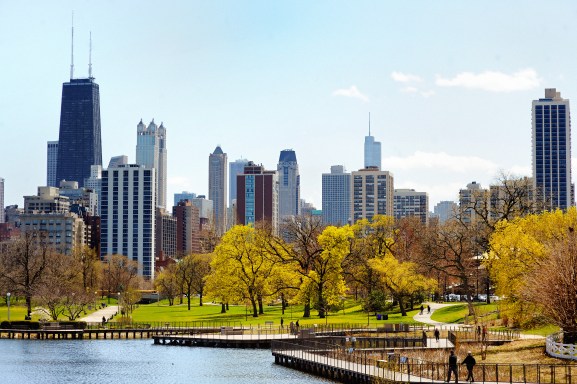 Until recently, most venture capitalists were reluctant to invest in startups outside the Bay Area. I know because half the VCs I pitched when I started my company turned me down because of my location.

From a personal perspective, this makes sense. Why would they want to fly halfway across the country and be away from their families more than absolutely necessary to shepherd startups when opportunities exist in their own zip codes? From a business standpoint, however, it’s an increasingly outdated view.

Entrepreneurs around the country are launching dynamic startups that have tremendous growth potential without the steep operational costs inherent to Silicon Valley. Look at a few of the multibillion-dollar exits to come out of Chicago: Grubhub, Braintree, and Cleversafe, to name a few.

The challenge with starting a Silicon Valley-like VC firm in Chicago boils down to a clash of cultures. The freewheeling Silicon Valley investment style doesn’t always mesh with conservative Midwestern business ethics. The solution? An investment community that’s willing to take major risks while serving as good stewards of capital.

Traditionally, big exits turn founders into angel investors. In turn, angel investors spur early-stage growth and innovation. Growing organizations depend on middle- and late-stage VC investment to reach the point of exit, but many aren’t getting that in Chicago.

There are coastal investment firms like Revolution, Benchmark, and Accel Partners that have invested in Chicago startups. But before Chicago’s tech scene can truly flourish, a few pioneering local investors will need to take on that risk in the Windy City by being more aggressive and writing bigger checks.

To capture investors’ attention and dollars, Chicago (and other regional hubs) must ramp up efforts in key areas:

Illinois boasts some of the best engineering colleges in the country — including Northwestern University, the University of Chicago, the University of Illinois at Urbana-Champaign, and the Illinois Institute of Technology — but many top students flock to Silicon Valley after graduation. They leave in spite of Chicago’s more amenable cost of living because they know they’ll get tremendous opportunities in the Bay Area, and they want to put their talents to use while building an exciting new enterprise.

Incentives for startup founders and investors

Beyond focusing on local strengths, Chicago leaders must establish incentives for young professionals to pursue their passions in the area. The Edward L. Kaplan New Venture Challenge through the University of Chicago, for example, has helped several startups launch — including Braintree and Grubhub — while achieving more than $5.8 billion in mergers and exits. More recent startups from the New Venture Challenge still growing in Chicago include PartySlate, Tovala, ZipFit Denim, CancerIQ, and Simple Mills.

These programs have created opportunities for college and business school students to establish their companies in Chicago. As more universities get in on the action — Northwestern has established student entrepreneurship hub The Garage and Wildfire, a pre-accelerator program for student teams — eager young minds will be motivated to stay in the area.

At the same time, we need to find ways to push investors to think locally. As I mentioned earlier, angel investors are a key component of any VC ecosystem. We need to do a better job of keeping Midwest angel money in the region through tax incentives, tax breaks, and other methods. Instead of scouring New York, Boston, and San Francisco for startups, these investors should be looking in their own backyards.

The Midwest has a high concentration of Fortune 500 companies, including Baxter, Kraft, General Mills, and Procter & Gamble. These juggernauts are already making moves to strengthen the startup scene with the launch of venture funds, incubators, and innovation centers.

Kellogg’s has done something similar by creating venture capital fund Eighteen94 Capital, which aims to invest roughly $100 million in young companies that are researching and developing new foods, ingredients, and packaging. General Mills’ 301 Inc. takes a similar approach by investing in health and wellness startups.

Other companies could follow their lead and do more for the broader entrepreneurial ecosystem. They could, for example, become more involved in the local university scene, where so many startups originate — perhaps by sponsoring pitch nights that give winners of local competitions funding to pursue their vision.

Note that these moves do more than simply benefit the startups. If Procter & Gamble had invested in Dollar Shave Club early, perhaps P&G would have been able to acquire it instead of Unilever.

In Milwaukee, Northwestern Mutual has plans to invest up to $85,000 in startups in its home city. There is no reason Chicago companies should not similarly pay it forward for the next generation of entrepreneurs.

Chicago has untapped potential to become a genuine player in the tech world by blazing its own path. But before it can flourish, local leaders must create the type of tech environment that attracts investor eyeballs.

Michael Burdick is the CEO of Paro, a startup that helps connect businesses to on-demand finance professionals.