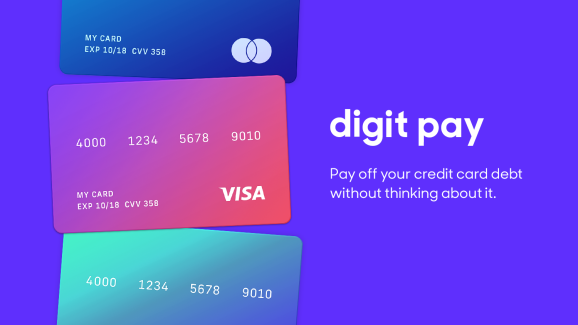 “Now our customers can sort of go live their lives, and Digit can be off in the background chipping away at their credit card debt for them automatically,” CEO Ethan Bloch told VentureBeat in a phone interview.

Since launch in 2015, Digit has saved users more than $1 billion, Bloch said, up from $250 million in January 2017. In addition to its SMS-based version, Digit has released a Facebook Messenger bot and iOS app.

Digit bot moves money to a savings account and factors in your spending habits to select amounts of money small enough to go unnoticed by you.

Digit bot can already be programmed to save money for an unlimited number of financial goals. But Digit made a dedicated service for credit card debt reduction, Bloch said, because 75 percent of its users have some form of credit card debt.

“Once you set these goals — you can have none or have a bunch — the algorithm that’s been underpinning Digit since day one can figure out that perfect amount of money to put towards your goals based on your unique financial situation that day,” he said.

In April 2017, Digit began to charge a $3 monthly fee for its personal finance bot. Bloch declined to share the number of customers but instead pointed toward the amount of money saved by customers.

“Interest is actually surprising tricky to get from the banks, not something they willingly put in their data feeds. We’ve done some testing of collection with that with the customer,” Bloch said.