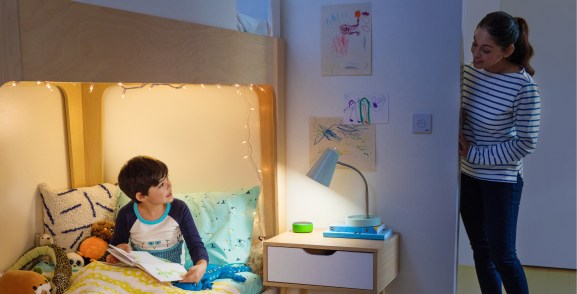 Earlier this week, Amazon released an Echo speaker made just for kids. The speakers go on sale May 9 and cost $80. That’s $30 more than the hockey puck-sized Echo Dot for adults, and you may as well keep your wallet open, because the main purpose of the Echo Dot for Kids appears to be the upsell of Amazon goods and services.

What you get for your money is a $50 Echo Dot — the same hardware, the same Alexa assistant in the cloud — wrapped in a foam padded enclosure that comes in blue, green, or red. That kid-friendly case almost makes sense, and it’s the same sort of padding Amazon uses to protect Fire tablets for kids. But the Echo Dot for kids is just like the one for adults in that it must stay plugged into the wall. I can see kids appreciating the shock of color, but the case can’t really be for protection.

The purchase of an Echo Dot for kids also gets you a two-year damage replacement warranty and one year of FreeTime Unlimited, Amazon’s service for parents to control the use of electronics, which has been available for parental control and kid-friendly content for years.

Also made available for the first time this week, FreeTime for Alexa allows parents to review their kids’ activity, put time limits on their usage, or block songs with explicit lyrics on Amazon Music. Alexa with FreeTime also positively encourages kids when they say please, encouraging kids to treat everyone — even their robot servant — with respect.

FreeTime Unlimited brings exclusive features to the table, such as ad-free radio or playlists, alarms from Disney and Nickelodeon characters, and premium skills from National Geographic, Disney, and Nickelodeon.

While FreeTime is great and all, it’s not exclusive to Echo Dot for kids. FreeTime is available for Echo, Echo Dot, and Echo Plus, as well. It also isn’t free.

If you haven’t been following along, the competition between Google Assistant and Alexa for the attention of kids has been heating up for the better part of the past year.

In late 2017, Amazon introduced Alexa skills for kids, and Google released more than 50 activities for kids, as well as family-friendly voice apps. There had always been a voice app that could read you a story in the Alexa Skills Store, for example, but these new skills required young people get permission from a parent to access, and both makers require children to create their own accounts to play new offerings like Elmo on Alexa or Mickey Mouse on Google Home.

Amazon has continued its push to capture more young users, bringing Alexa beyond voice apps with the Gadgets API made especially for games. Makers of When in Rome, a family board game that can be controlled by Alexa, and the Play Impossible game ball that works with Alexa both took part in the inaugural class of the Alexa Accelerator hosted by TechStars in Seattle.

In the short-term, Amazon wants Echo Dot for kids to fuel paid subscriptions and Prime membership. Long-term, Amazon wants to train kids to keep up with that brand identity, watching Prime Video instead of Netflix, listening to Prime Music instead of Spotify, and eventually shopping with Amazon over Google or other competitors.

A voice assistant or smart speaker made especially for kids is arguably long overdue. Anyone who has ever seen a child lob every question that comes to their mind at a smart speaker knows what I’m saying is true.

There have been attempts made previously, by startups as well as by Mattel — which made, then rescinded plans to create a smart speaker and assistant for kids. Whether Google or Amazon ever go as far as to build an assistant experience especially made for kids or not, with FreeTime, Amazon is starting to develop an assistant experience more in line with kids’ needs. In FreeTime, for example, Alexa doesn’t answer questions about guns or alcohol.

Accredited child psychologists were consulted to create some of Alexa’s answers to kids’ questions, an Amazon spokesperson told VentureBeat in an email. But there’s a lot of nuance to work out to optimize each interaction with a child and to answer questions in the way parents deem fit.

The launch of the Echo Dot for kids is the continuation of a growing trend of voice-enabled products and services for kids by smart speaker industry leaders Amazon and Google. And while the idea of an assistant especially geared toward kids is exciting and should definitely be explored, that’s not what this appears to be about.

A rosy assessment of this news could call it the continuation of Amazon’s effort to give parents more control of the content their kids are exposed to. Features and services like FreeTime are necessary for families, but Echo Dot for kids is just an Echo Dot wrapped in unnecessary foam. It’s another Amazon paid subscription pitch, a Prime perk discount, and an effort to keep kids within the company’s walled garden of apps, streaming content, and shopping.