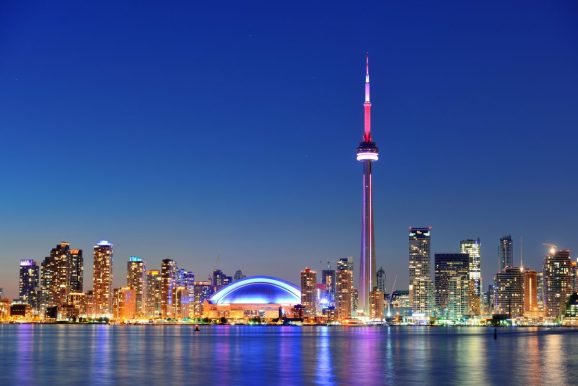 Toronto’s status as a burgeoning tech and artificial intelligence hub recently received a huge stamp of validation. The community made the final list of 20 cities in the running for Amazon’s HQ2, earning that distinction without offering Amazon any tax breaks or financial incentives.

Being a tech torch bearer is nothing new for Canada. In the early 2000s, BlackBerry and Nortel held sizable market shares in smartphones and telecom, respectively. Not long after that, though, an inability to gain a competitive advantage closed the door on each brand’s chance to dominate the marketplace.

AI presents an opportunity for Canada to strengthen its standing in the global tech sector, but the country must learn from past mistakes. To elevate Canada’s AI profile and continue to attract the Fortune 500s of the world, Canadian tech entrepreneurs must think globally, invest in their natural talent resources, and fight the complacency that plagued the BlackBerrys and Nortels of the past.

How the north can keep moving up

The Amazon HQ2 news is just one part of Canada’s promising tech trajectory. An International Data Corp. report recognized five Canadian AI vendors for their technological innovation and promising new business models, while The Vector Institute, a program of the University of Toronto, recently received a $5 million contribution from Google.

Backed by a federal government that supports advanced AI interdisciplinary frameworks, Canada should approach its technological renaissance from a creative perspective, rather than a purely algorithmic one. Here are four ways the ecosystem of Canadian tech leaders can build on the current momentum to establish the country’s international tech footprint:

Canadian entrepreneurs don’t have the funding or the risk tolerance of American companies, which puts them in a more local mindset. Now that the ecosystem of AI and data innovation is more global, Canadian entrepreneurs should expand that local mentality and use global partnerships to scale quicker.

The U.S., for example, is Canada’s top trading partner and closest neighbor and is currently enjoying a data science boom. A partnership with the U.S. could help Canada leverage its own AI strengths and present a united front against global competitors such as China that invest more in the industry.

Partnerships with U.S. companies give Canadian AI outlets the chance to get out of their own backyards. These unions should shine a global light on the resources and potential the Canadian AI community has at its disposal.

You may remember when Corel started what appeared to be a very successful Linux project. In the end, however — in spite of a desktop publishing system that was ahead of Adobe — the company was unable to execute as quickly as its American counterparts.

Corel’s missed chance reads similarly to BlackBerry’s and should serve as a warning to Canadian AI leaders about the dangers of procrastination.

Canadian companies need to realize that their opportunities often come with expiration dates, and they should strive to meet these deadlines by acting quickly and developing a more advanced product mindset to keep Canada’s tech businesses and ecosystem at the forefront.

The best resource on-the-rise entrepreneurial communities possess is talent. The STEM talent coming out of Canada’s university and research fields is second to none internationally, yet graduates tend to migrate elsewhere to make their mark.

It’s imperative that leaders recruit, train, and incentivize these potential assets if they want to retain them. To do this, leaders should give talent opportunities to demonstrate their tech and AI research and quickly deploy it to wider audiences. This isn’t just a chance for talent to learn how to commercialize their findings, it also shows them that their ideas can grow within Canada’s tech ecosystem.

I teach a class at Toronto’s Ryerson University called Super Course, which partners tech-focused students with peers from digital media, new media, media production, and computer science. Students build functioning prototypes, then work within their teams to learn how to market said prototype to its fullest potential. Avenues like this give students access to real-world experiences and data and connect them with a startup community that could inspire them to set some professional roots locally.

Though the estimated $260 million raised by Canadian AI startups in 2017 suggests that Canada’s AI scene is on an upward trajectory, it’s no time to get complacent. In fact, now is the perfect time to take advantage of that momentum.

That starts with building healthy AI competition throughout all of Canada’s universities and research institutes. This sense of competition — present at Stanford, Columbia, MIT, and other U.S. universities — doesn’t really exist among Canada’s higher education institutions at this time.

With AI still in its infancy, the Canadian government can cultivate a culture that breeds different AI philosophies through competition and innovation. The country can also create an environment in which institutions like Ryerson University and the University of Toronto use grants, fellowships, and other benchmarks to incentivize research talent. This approach would allow universities to establish distinctive identities, put out better work, and continue to establish the country’s relevance in the global AI landscape.

Canada has the resources and the momentum to build on its profile as an emerging AI hub. However, cities must think globally, nurture talent, and encourage competitive growth to fulfill that promise.

Hossein Rahnama is a recognized figure in ubiquitous computing and is the founder and CEO of Flybits, a cloud-based, context-as-a-service solution with offices in Toronto, Redwood City, and London.