Mozilla has confirmed plans to introduce sponsored content to new tabs in the upcoming Firefox 60 release.

The news comes just a few months after the company revealed it would begin experimenting with “an occasional sponsored story” within the Pocket recommendations section of new browser tabs in Firefox Beta. Following the trial, which was only made available to a “small portion of U.S.” users, the feature is just about ready to hit prime time via the version of the Firefox browser scheduled to roll out next week. 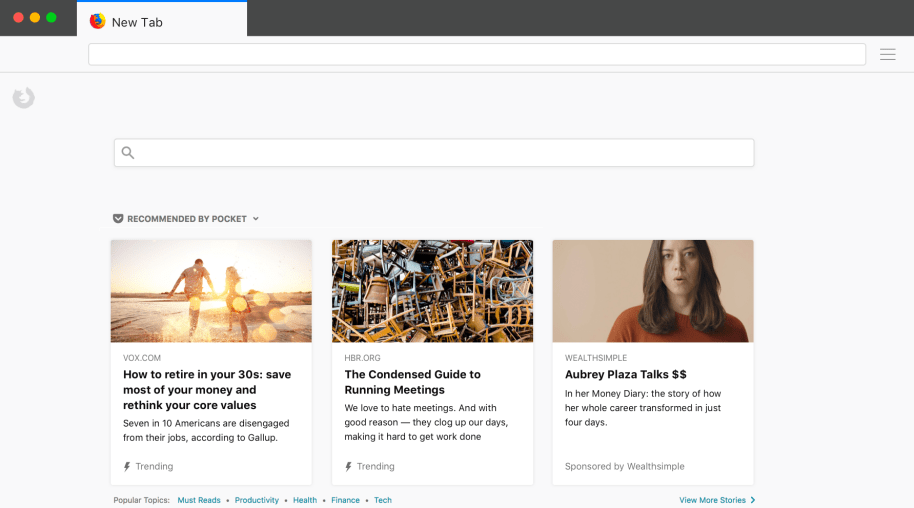 By way of a quick recap, Pocket is the popular web-clipping service that lets users save all manner of content from the internet to read or watch later across multiple devices. Mozilla had supported Pocket natively for a while anyway, but last February Mozilla went all-in by buying Pocket outright.

With the launch of the new upgraded Firefox Quantum browser in November, Mozilla announced a number of deeper integrations with Pocket, including showing story recommendations in new tabs based on trending stories, though this remains limited to the U.S., Canada, and Germany for now. 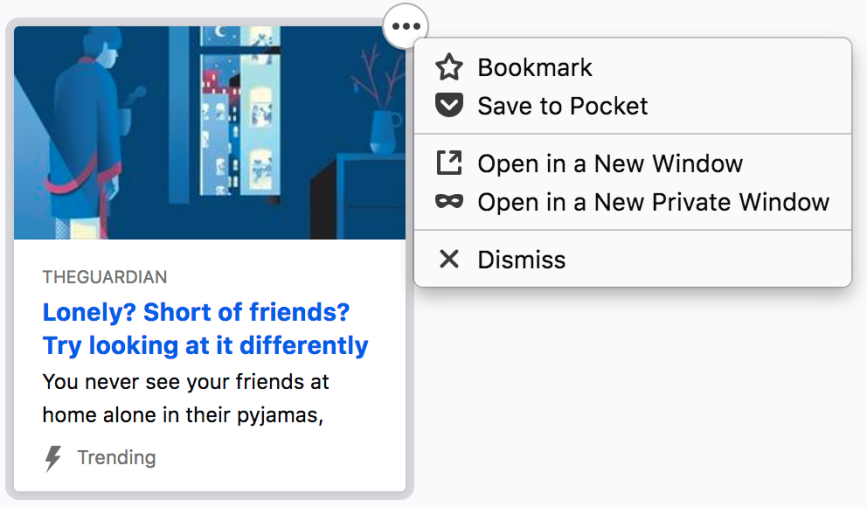 Above: Pocket in Firefox

Mozilla also revealed that it was testing out personalized recommendations, sending out a list of “related” websites to the main trending recommendations. The company said that if a user were to click on one of those links, that action would be treated as a signal of interest — but only if it correlated with the user’s browsing history elsewhere.

Sponsored stories represent another piece of the puzzle, though Mozilla is quick to stress that privacy and quality are underlying tenets of its new Pocket-integrated tabs.

“Neither Mozilla nor Pocket receives a copy of your browser history,” Pocket’s FAQ section reads. “The entire process of sorting and filtering which stories you should see happens locally in your copy of Firefox.”

Ultimately, what Mozilla wants is to avoid all those poor click-bait type stories that plague social platforms such as Facebook. It wants to offer both privacy and personalization, and it now wants to monetize that directly through sponsored stories. Crucial to Mozilla’s narrative here is one feature in particular: the ability to disable sponsored stories via your new tab preferences. 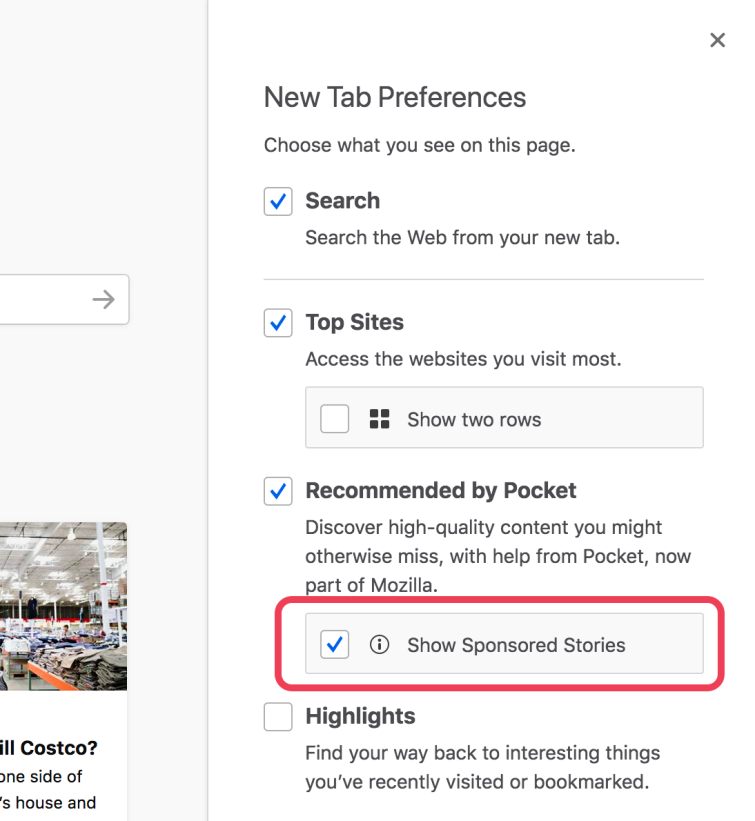 A common theme seems to be now emanating from Mozilla in the wake of the Cambridge Analytica data privacy scandal that continues to blight Facebook, with Mozilla pitching Firefox as the good guy that’s looking to protect your privacy.

Just last month, Mozilla launched a Facebook Container add-on to isolate your web browsing activity from Facebook. Now Mozilla — unlike Facebook, which doesn’t allow you to disable ads and sponsored content — is touting its ability to give users more control over sponsored content. Sure, it will activate sponsored stories by default, but it’s confident that with its promise of privacy and quality, users won’t go hunting for the option to deactivate.

“The balance between commercial profit and public benefit is critical to the health of the internet, which is central to our mission at Mozilla,” the company said in a statement. “Our work in this area is critical in order to help create change.”

Sponsored stories will be launching in the U.S. only at first, and Mozilla has given no timeline for when the feature may roll out internationally. “We are starting in the US first,” Pocket CEO Nate Weiner told VentureBeat. “We want to get it right here first then expand.”