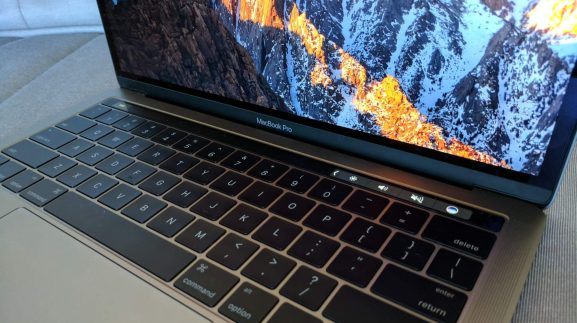 If the latest iPhone battery replacement controversy hadn’t generated enough bad publicity for Apple, the company now faces another issue: demands to fully recall and replace the keyboards on current-generation MacBook Pro laptops. A new petition has already gathered hundreds of signatures, claiming that “[e]very one of Apple’s current-gen MacBook Pro models … is sold with a keyboard that can become defective at any moment due to a design failure.”

Apple controversially debuted a new “butterfly” keyswitch design in its ultra-slim 12″ MacBook before incorporating an improved second-generation version in 2016 and 2017 MacBook Pros. The company says that to fit a full-sized keyboard into the MacBook, it “designed a keyboard from the ground up — including each key and its underlying mechanism. This makes the whole keyboard not only much thinner, but also more comfortable and precise, so your fingers feel right at home.”

Initial complaints over the MacBook keyboard focused mostly on noticeably reduced key travel, which professional writers found frustrating. The subsequent MacBook Pro version remedied that issue by restoring much of the key travel, though some critics maintained that the typing experience remained sub-par compared with prior MacBook Pro keyboards.

After months of use, however, even otherwise satisfied users began to report sticky and unresponsive keys. Dust and other particles normally found on hands were slipping under the keys and gumming them up, in some cases temporarily, in others permanently. Users seeking fixes discovered that Apple repairs would be incredibly expensive — in the $700 range — and time-consuming, as the keyboard isn’t user-serviceable. As a self-help remedy, Apple suggests spraying compressed air to dislodge particles, which in our testing can hurt as much as it helps.

While complaints over the keyboard have been circulating for months, they reached a critical mass this week ahead of the petition’s launch. After an AppleInsider report claimed that certain Apple stores were seeing repair rates for the new keyboard that were roughly twice as high as the prior version, normally Apple-friendly writers described the new design as “a ticking time bomb for users,” a “design failure,” and “an altogether defective product that should be recalled.”

Apple has offered exchange and repair extension programs across multiple defective devices, including iPhones, Macs, and various accessories. The non-Touch Bar version of the 13″ MacBook Pro was quietly added to the list due to potential battery issues last month. While it seems unlikely that Apple will offer a full recall of all affected MacBook models, the petition’s growth will highlight the need for a better repair and replacement policy as the company contemplates its options.