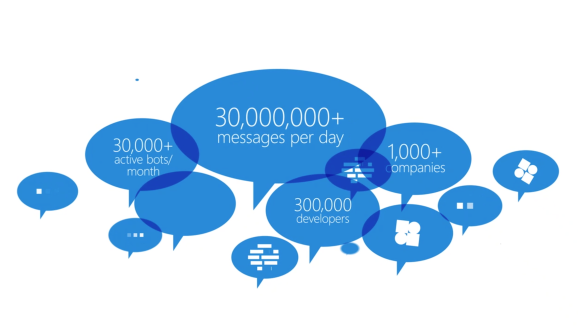 Microsoft’s Azure Bot Service has now been used by almost 300,000 developers. That’s up from 240,000 in December 2017, a Microsoft spokesperson told VentureBeat in an email. The new figure was shared onstage at Microsoft’s Build developer conference being held May 7-9 in Seattle.

Azure Bot Service uses the Microsoft Bot Framework, which reported more than 130,000 users one year ago.

Microsoft Bot Framework was initially launched two years ago at Build. Today the toolkit can be used to build, test, and deploy automated bots on more than 16 platforms, including chat apps like Kik, Microsoft Teams, Slack, and Facebook Messenger as well as Cortana and Office 365.

Microsoft had a series of conversational AI-related announcements to make today, including the first-ever Cortana-Alexa demo, and updates for better small talk from Azure Bot Service. A Speech Devices SDK was also rolled out today.

Microsoft’s conversational AI offerings and its view that we will live in a multi-assistant world were discussed at length today by CEO Satya Nadella.

“It was two years ago when we talked about bots as the new applications,” Nadella said. “Every company will build branded agents. This is pretty critical because if these are the new apps, you need to be able to brand them, especially the consumer-facing ones. It’s not sufficient to just build skills for other agents, but you need to be able to have your own agent that can directly talk to customers, and every agent should be able to converse across multiple personal digital assistants. And we now see a tremendous amount of momentum with all of these technologies.”

Other news out of Build today includes Project Brainwave, a super-fast AI processing released in preview today on Azure; a $25 million investment in AI to improve the lives of people with disabilities; and the open-sourcing of Azure IoT Edge runtime.