While 2017 was a strong year for Midwestern startup exits in general, a deeper analysis demonstrates that Chicago in particular is among the nation’s leading cities for top exits and IPOs over the past five years. This indicates the city has evolved and is now presenting a recurring pattern of startup successes that drive attractive venture returns.

Using data from Pitchbook, SEC filings, and my firm’s own proprietary analysis, we at Hyde Park Angels looked at the 10 most valuable exits in major cities outside Silicon Valley from 2012 to 2017. Looking specifically at exits and acquisitions, our research shows Chicago’s 10 most valuable exits generated more money than those in the New York City, Seattle, and Boston metro areas, and its total is only surpassed by Los Angeles.

Chicago’s top 10 exits generated $14.9 billion thanks to eight companies that exited for more than $1 billion apiece, including GrubHub, Coyote Logistics, and Naurex. New York was close behind with $14.2 billion, with successful exits from Jet, Blue Apron, and Etsy. Seattle and Boston followed New York, each generating a little more than $10 billion. Outperforming all cities was Los Angeles, which saw $30.5 billion in its top 10 exits over the past 5 years — a total that was significantly boosted by Snap’s $20 billion IPO last year. 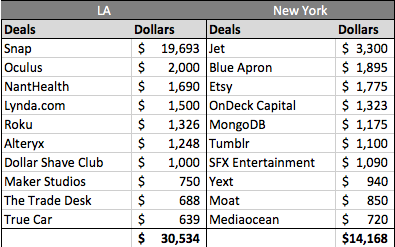 As was the case with Snap in Los Angeles, extreme outliers can skew the perception of how much startups in a particular city are typically exiting for. For example, Groupon’s $20 billion IPO in 2011 buoyed Chicago’s exit numbers for several years. These anomalous exits can make it a challenge when we try to analyze trends at both the national and regional levels.

If we remove L.A.’s Snap IPO, the city’s top 10 exits over the past 5 years total $11.4 billion. This puts all of the top five cities within a closer range of one another. When we examine the exits themselves, we see that each city performs well across major sectors like consumer, enterprise technology, marketplaces, and health care.

Interestingly, when we look at these cities without the Snap outlier, Chicago leads the group. The value of Chicago’s top 10 exits is slightly higher than those in New York and 1.3 to 1.5 times higher than those in L.A., Boston, and Seattle. Perhaps more interesting in this scenario is that Chicago’s 10th most valuable exit (Trustwave’s $850 million acquisition by SingTel) was $261 million higher than the average 10th most valuable exit across all cities ($589 million). These trends reveal Chicago’s strength and consistency as a leader among its peer group.

This analysis further indicates how Chicago’s startup ecosystem nurtures Midwest economic growth and entrepreneurship. My firm defines the Midwest as Minnesota, Wisconsin, Illinois, Indiana, Ohio, and Michigan — a region that contributed $2.9 trillion to the GDP in 2016. Midwest patterns of strength and consistency in our ecosystem are not only good news for the Midwest and Chicago’s ongoing ability to attract more capital, they are integral to the economic strength of the nation.

Pete Wilkins is a serial entrepreneur and head of one of the top early-stage investment groups in the country, Hyde Park Angels, which focuses on leading the market with a people-first approach. Prior to HPA, Wilkins successfully founded, built, and turned around companies in multiple industries. He is an active advisor to many entrepreneurs, serves on several boards, and frequently speaks about entrepreneurship and venture capital.