Amazon has announced that Sumerian, a web-based tool leveraging Amazon services to create 3D, AR, and VR applications, is generally available as of today. The tool debuted in “limited preview” at AWS re:Invent last November.

Sumerian enables developers to construct “scenes” featuring interactive characters and environments that can be accessed across multiple platforms. Using a URL link to Amazon’s cloud, scenes can be viewed in browsers with WebGL or WebVR support, headsets such as HTC Vive and the Oculus Rift, plus iOS (ARKit) and Android (ARCore) devices. 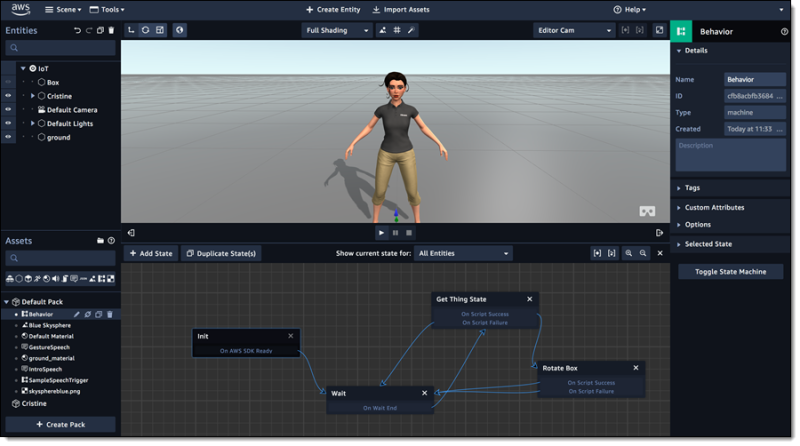 The key to Sumerian’s developer appeal, Amazon notes, is that it “does not require any specialized programming or 3D graphics expertise,” instead using a web-based editor to create scenes and a visual scripting tool to chart how characters and objects will respond to users. Developers can also draw on Amazon’s Lex, Polly, AWS Lambda, AWS IoT, and Amazon DynamoDB services to power user-character interactions.

An initial demonstration created by Amazon and Fidelity Labs shows a user requesting that a virtual character populate a 3D office’s wall-mounted panels with stock charts. Powered by Amazon’s services, the character recognizes the user’s spoken requests, calls up live stock data, and places it on one of the displays. While the demo doesn’t look like it’s ideal for twitch gaming, Amazon sees Sumerian as appropriate for employee education, training simulations, a virtual concierge, mock-up creation, and retail applications.

Rather than charging developers for using its tools, Amazon plans to monetize Sumerian based on the amount of storage space consumed by each developer’s 3D assets and the number of times those assets are accessed. Notably, Amazon has continued to describe support for Unity projects as “coming soon” since last November but supports importing FBX and OBJ format 3D assets.

Assuming you’re building solely in Sumerian, Amazon’s hosting service is not prohibitively expensive for small developers. Viewed 100 times, a sample tour of a virtual apartment would cost $1 per month, while a version adding an Amazon Polly narrator would cost around $1.20. By comparison, a significantly more complex VR training application used 1,000 times might cost $23 per month.

Free tiers of AWS, Lex, and Polly services are now available to let developers test Sumerian. New users can publish a 50MB scene with the equivalent of 100 views per month — a total of 5GB of use — for free during the first 12 months. Additional trial and pricing details are available from the Sumerian website.