YouTube is to begin surfacing more song and artist information for videos that are hosted on the YouTube platform.

The Google-owned video-streaming giant has long offered a service called Content ID, which automatically identifies copyrighted content on YouTube and lets copyright owners decide what happens next. They may request to monetize the video by showing ads, for example, or they may request that the video be blocked.

Now, the very same technology that powers Content ID will be used to display more data via a “music in this video” feature.

“YouTube is committed to providing recognition to all of the people who contribute to the creative process, and this is just the beginning,” the company said in a blog post. “Through our industry partnerships we will expand the scope and quality of data to ensure all creators are credited as completely and accurately as possible.”

Google already offers a range of music-themed apps and services beyond the main YouTube portal, including YouTube Music and YouTube Red subscription service, while the company is also reportedly planning a “Spotify-killing” subscription music-streaming service later this year. Put simply, Google wants artists, record labels, and publishers onboard as it pushes out into the music realm, and this latest launch should help demonstrate that it’s serious about crediting original music authors and rightsholders. Ahead of its public listing this year, Spotify announced a similar feature when it launched songwriter and producer credits for each track.

This launch also opens the door for Google to better monetize and promote its own services. Plus, it’s fair to say that millions of users genuinely want to know what song is playing in the background of a video, who wrote it, and more. So it should be a win-win for all concerned.

From today, when you hit the “show more” option below a video, you can see a full list of people who were involved in the making, licensing, and producing of the track. This will apply to any video, be it an official music video, a DJ set, or a homemade video with background music.

You’ll also note that YouTube is using the new feature to cross-sell other products — for example, if the song is available to listen to ad-free on YouTube Red, it will link you directly to that. 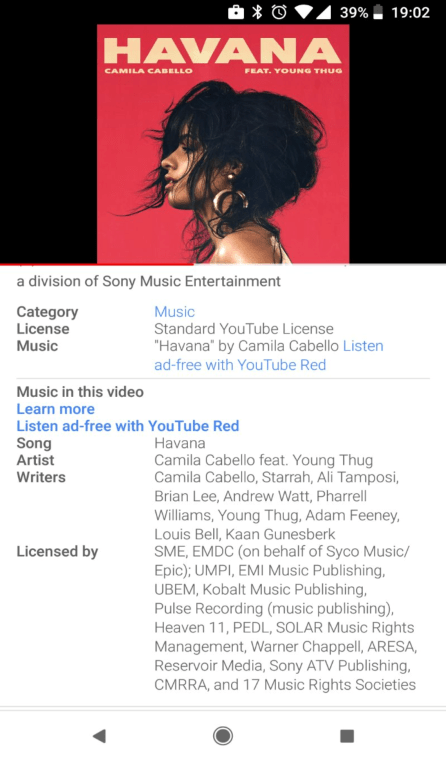 Above: Music in this video – Camila Cabello

When a song is played in the background of a homemade video, YouTube will also link directly to the artist’s official channel and the official version of the music video, if it’s on YouTube.

“‘Music in this video’ strives to provide greater recognition and exposure to the people who contribute to the creative process,” the company added. “It also provides more opportunities for artists and songwriters to reach YouTube’s diverse audience, whether those viewers come to the platform for music videos, science experiments, or beauty vlogs.”