Spotify has announced the latest step in its mission to get the music industry on its side: It will now show songwriter and producer credits for each track.

The new feature is only available in the desktop version of Spotify for now. To access it, right-click on any song and you’ll see who was behind the track, including performers, writers, and producers. 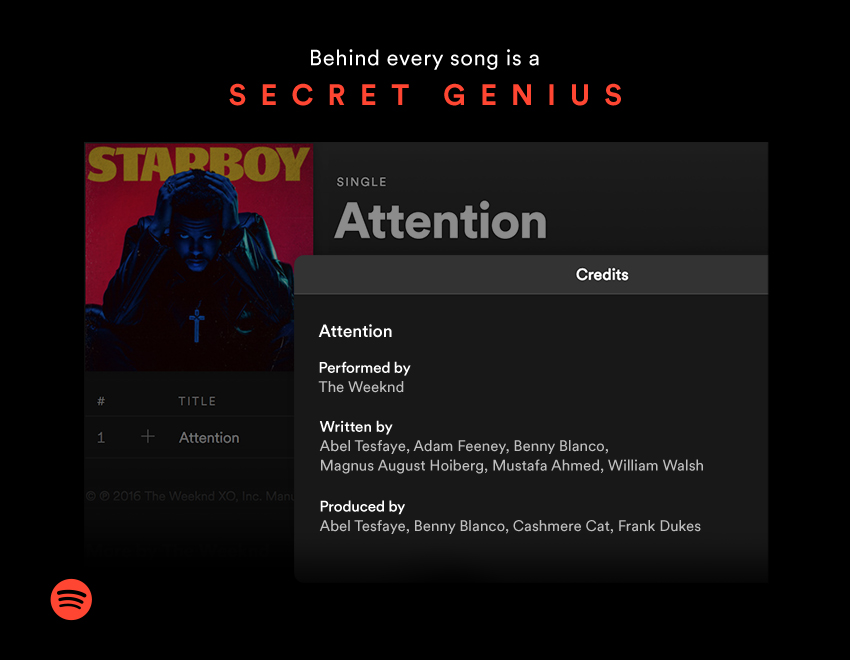 Above: Who wrote it?

The music-streaming giant has long been criticized by artists and the broader music industry on a range of issues, including low royalty payments and for offering a free ad-supported tier. Indeed, the company was catapulted into the headlines a few years back when Taylor Swift removed her music from the service after Spotify refused to make her music only available to paid users. However, Spotify has slowly acquiesced to the industry on a number of fronts, including allowing artists to limit some new releases to the premium tier for two weeks. And last April, Spotify acquired Mediachain, a blockchain-based technology company Spotify hopes will help it match royalties with with the correct rightsholders.

With Spotify gaining around 10 million new paid subscribers every 5-6 months while gearing up to become a public company, the Swedish tech firm clearly wants as much good will from the music industry as possible. Today’s news is a small step for sure, but it goes some way toward mirroring traditional album and single sleeve notes, which usually give complete credits for those responsible for making the music.

“Songwriters are an integral force behind the music we love,” said Tiffany Kumar, global head of songwriter relations at Spotify. “With the newly launched credits feature, we aim to increase songwriter and producer visibility and, in turn, foster discovery among new collaborators, industry partners, and fans.”

“I called upon the streaming services to display the names of the songwriters who wrote the songs just as they clearly credit the artists who recorded them,” Bandier said in a statement issued to VentureBeat. “With this announcement, Spotify has taken a first, important step to properly recognize the vital contribution that songwriters make to its service and should be applauded for it. Songwriters are the essential lifeblood of the music industry. Without their words and music there would be nothing for artists to record, no hit songs and no music to stream.”

For now, the details included are derived from metadata provided by the record labels, so it’s possible there will be many blanks in the songwriter/producer fields. But actively surfacing this information may nudge record companies to include the full and correct details when uploading their music.

“The more we share information, the more opportunities we can help create for songwriters,” added Annika Goldman, ‎director of music publishing operations at Spotify. “This is just the beginning of making songwriter and producer credits more easily available to Spotify listeners, and we look forward to continually improving that information, in close collaboration with our music industry partners.”