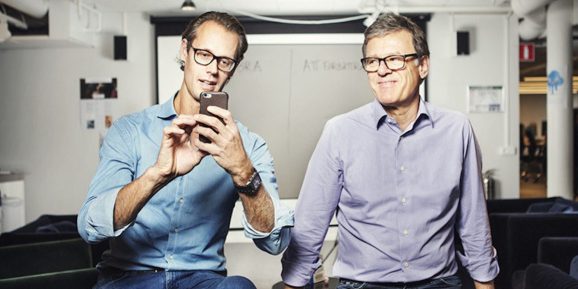 The announcement just 10 days ago that Sweden’s iZettle was planning to go public provoked cheers among European tech boosters, but that excitement proved to be short-lived. Instead of celebrating the rise of an independent tech company, we’re watching yet another local startup be gobbled up by a U.S. tech giant.

In this case, the deep pockets belong to PayPal, which announced it is paying $2.2 billion for the Swedish fintech company. That price tag offers the first clue as to why iZettle took the money rather than pursuing the IPO, which was expected to give the payment company a valuation just north of $1.1 billion.

iZettle cofounder Jacob de Geer penned a note explaining the decision, ticking off the usual boxes about how the companies have similar cultures and visions and how the deal will allow iZettle to go further faster.

“By joining the PayPal family, we’ll become iZettle with superpowers and jump on a fast track to realise our vision,” he wrote. “The opportunity to become part of PayPal was too good to pass up. Not only because of what it means for iZettle and for iZettle’s employees, but because of what we can offer to our merchants.”

That may turn out to be true, though tech mergers as a whole typically tend to start off with such optimistic sentiments only to run into sobering realities. There’s always a chance that the iZettle-PayPal hookup will be an exception, but success is far from guaranteed.

Given that iZettle is in 12 countries compared to PayPal’s 200, the latter can certainly help it deal more quickly with the various regulatory issues needed to expand into new geographies. But just how iZettle will be integrated (or not integrated) with PayPal’s own competing point-of-sale payment services remains to be seen.

Still, the IPO likely posed even greater risks for iZettle. On May 8, the company announced its intention to list on the Swedish stock exchange but had only provided preliminary financial details. In fact, iZettle had not published a more detailed prospectus before the PayPal deal was announced.

Naturally, the numbers iZettle disclosed were bullish. The company is on track for $165 million in revenue this year, up 60 percent from a year ago, while losses appear to be narrowing.

With that momentum, the company had said it hoped to raise about $227 million with the IPO. But it hadn’t gotten around to detailing, for instance, how much of that might go to insiders who were selling shares, nor how much would go to the corporate treasury.

Speaking of which, iZettle raised a total of $150 million in venture capital over the years, including a round of $47 million just last December. But at least $83 million of that was debt funding. Between paying off that debt and possibly watching some money go to insiders, an IPO looked a lot less like a possible corporate windfall.

Of course, the company was itching to get its hands on that money, having watched another U.S. competitor, Square, enter the U.K. market last year and talk up its European ambitions. With a market cap of about $22 billion, Square likely had the brand awareness and financial resources to give iZettle a good run for its core point-of-sale market.

The prospect of battling Square and PayPal for the hearts and minds and wallets of retailers — and with far fewer financial resources —  meant iZettle executives would have had to do one hell of a selling job to make the IPO a success, let alone ensure the company would continue growing and reach profitability.

Big news – iZettle to join forces with PayPal. Becoming a part of the PayPal family will give us and our merchants an amazing opportunity to grow and expand. We’re so excited! Read Jacob’s thoughts on the news here: https://t.co/6Pc9eKOTKx pic.twitter.com/881a9TtzGq

So when PayPal came calling, it’s no surprise iZettle was willing to listen. The $2.2 billion price tag will certainly make this one of the biggest European deals to date, and it’s PayPal’s biggest acquisition by a huge margin, though PayPal has still not detailed how much of that figure is cash or stock, or whether it includes assumption of iZettle’s existing debts.

For iZettle’s part, the company appears to be retaining some independence, and de Geer will continue to run operations in Stockholm. But European tech boosters will have to be content with iZettle becoming yet another significant branch of a U.S. tech company.