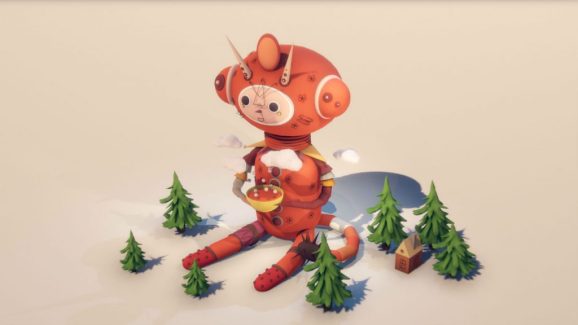 Tvori is a VR art app.

Though it may not be as popular as Tilt Brush, Blocks, or Oculus Medium, Tvori remains one of VR’s most versatile and best art apps, enabling you to create and animate scenes regardless of skillset. The app’s latest update, arriving this month, allows you to create even better scenes.

One of the biggest additions to Tvori 0.3 is sound, for example. Not only can you now implement audio clips to be a part of your scene, but you can make them yourself inside VR using your headset’s microphone, too. Simply grab a virtual mic and you can create audio files that appear as orbs. Pick up and place those orbs just like you would any other object in Tvori to position the origin of the sound within the environment and then blend it with the existing animation framework to trigger timings.

In other words, you can take an audio file and place it inside a character’s head. It gives the illusion of the character model speaking and further expands what you can do with Tvori.

Sound isn’t the only thing you can import, though. You can now bring other 3D assets and images into Tvori. That means you could build new objects for a scene in a similarly simple creation suite like Blocks, for example, and then import it into the app to make something entirely unique, free of the existing assets the studio has already made. You can import and even animate skinned characters, too.

Finally, there’s a new keyframe animation mode, which will be familiar to anyone that’s been playing around with the animation suite in Quill. It allows for more controlled, precise animation that takes a bit of extra work compared to the usual system of picking up and moving objects, but the results can lead to more convincing overall animations. As for the existing animation, you can now add curves to travel lines the fine-tune the movement from one point to the other.

Once everything’s done, you can now export your creations as an FBX file, too.

Tvori remains in Early Access for now, though significant updates like this suggest the finished article will be one of VR’s most fully-featured creation apps. You can pick it up for $19.99, though that price may rise come full release.