Uber has announced its latest effort to win back support from drivers in Europe: comprehensive insurance coverage.

Dubbed “partner protection,” the new benefit is being offered in partnership with insurance giant AXA and goes into effect across Europe from June 1. This is an expansion on a similar offering Uber announced with AXA in France last summer.

The new plan will cover a range of drivers’ medical expenses, including sickness pay, maternity/paternity payments, accidental death benefits, jury service coverage, and more. Taking the U.K. figures as an example, Uber will cover medical expenses up to £7,500 for costs not covered as part of public health services, including some private services, such as physiotherapy. It may also pay “off-trip” sickness compensation of up to £1,125 for situations in which drivers can’t work for seven consecutive days, with an upper limit of 15 days. A one-off payment of £1,000 is also available for new parents. 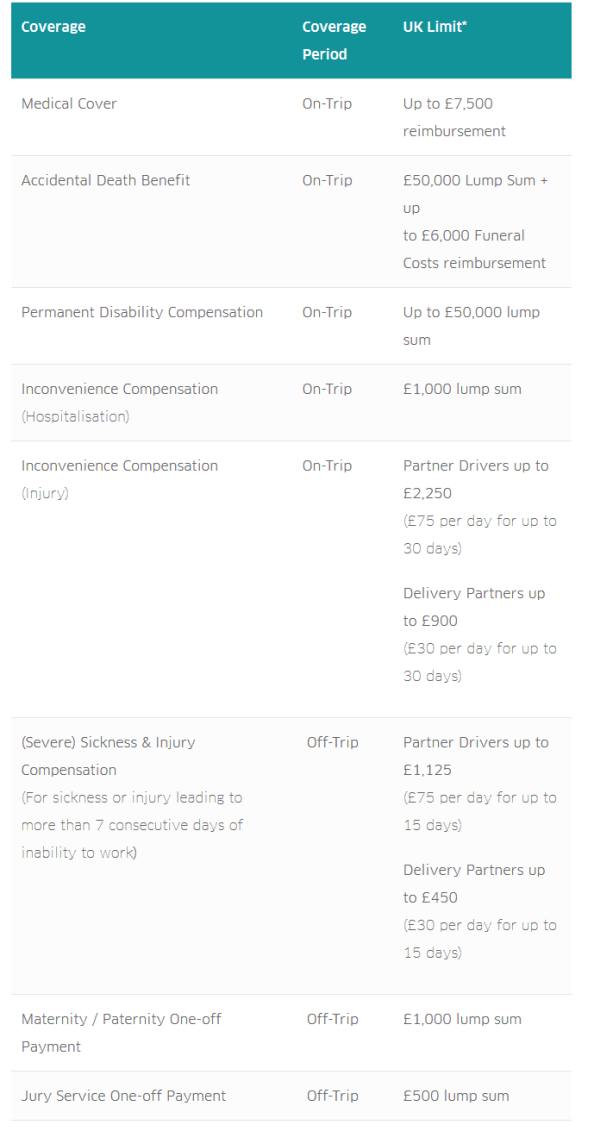 It’s worth noting here that Uber already offered an opt-in insurance plan in the U.K., however the cost of that was split between Uber and the driver. That “Uber IPSE” program is now being wound down and replaced with this latest offering, which will apply to all European drivers — entirely at Uber’s expense.

There are caveats, of course, and not all Uber drivers may qualify. The main qualifying criteria is that drivers must have completed at least 150 trips in the previous two months, while couriers through the Uber Eats program must have carried out at least 30 deliveries in that period.

Still, it does seem like a decent offering on the surface, assuming there aren’t any other hidden clauses. Ultimately, Uber is under significant pressure on multiple fronts around the world, with rivals creeping into its territory, drivers reportedly earning very little, and city regulators taking a firmer stance on Uber’s business practices. Uber is currently trying to fight a ban in the U.K. capital of London, and this latest endeavor should go some way toward improving its image.

“Partner Protection is designed to provide Uber partners with peace of mind while preserving the flexibility they value,” noted Pierre-Dimitri Gore-Coty, vice president and head of operations for Uber’s EMEA business. “Whether it’s sickness, an injury, or jury duty, we believe partners deserve to be protected in case life  — or work — doesn’t go according to plan.”