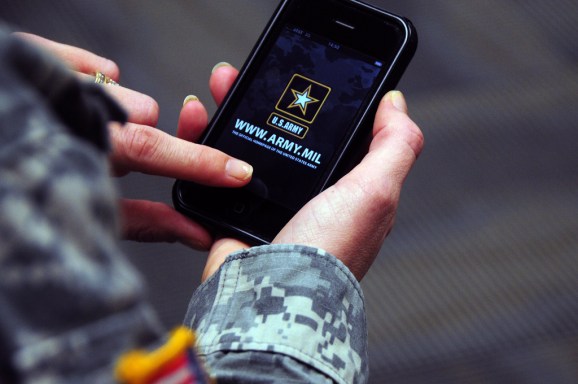 A solider using an iPhone.

In a vote of confidence for artificial intelligence research, the Pentagon is set to announce plans for a new Joint Artificial Intelligence Center (JAIC) that might be modeled on Project Maven, the controversial collaboration between U.S. military and private companies that trained algorithms to analyze drone footage. The center will dovetail with the expansion of Project Maven’s technologies into new fields and military operations.

The JAIC, a proposal for which Pentagon research and development chief Mike Griffin is due to submit next month, aims to accelerate intelligence and military use of machine learning. Bob Work, one of the founders of Project Maven, told Wired in an interview that it could act as a kind of accelerator for AI projects, recruiting commercial contractors to develop military software and systems.

Project Maven, also known as the Algorithmic Warfare Cross-Function Team, launched in April 2017. Google’s involvement was highly controversial among employees, nearly 4,000 of whom signed a letter addressed to CEO Sundar Pichai urging the company to pull out of the project. This month, roughly a dozen employees quit in protest.

The goal of Project Maven was to develop software algorithms that could distinguish between vehicles, people, and cars, as well as track objects of interest, with the aim of deploying the system in combat zones by 2017. It quickly surpassed that goal — the newest iteration of the system can highlight items on a digital map and be quickly retrained to reduce errors and track new objects.

Despite Project Maven’s negative publicity, the Pentagon, spurred on by its success, doubled the budget to $131 million this year. The Defense Department said the algorithms were already in use by contractors near ISIS-controlled territories, U.S. military installations in the Middle East and Africa, and a half-dozen other locations.

The military plans to use Project Maven’s machine learning algorithms to sort through materials captured in raids, and potentially to help military and intelligence analysts prioritize enemy targets. Currently, researchers are in the process of refining the computer vision algorithms, which were developed with smaller, low-flying drones in mind, for high-altitude autonomous aircraft such as the Global Hawk, which can surveil combat zones at a height of 60,000 feet.

The U.S. isn’t the only country investing in autonomous weapons systems. Earlier in 2018, the Indian government announced the formation of a task force that will recommend ways machine learning could be incorporated into the country’s aviation, naval, land, cybersecurity, nuclear, and biological resources. China is testing autonomous tanks, aircraft, reconnaissance robots, and supply convoys as part of a 1.1 trillion yuan ($173.5 billion) plan to modernize its armed forces. And Russia is believed to be investing in AI-enabled defense systems.