Apple’s Worldwide Developer’s Conference produced the usual parade of new features for its various operating systems, some impressive and some incremental. But on a more philosophical level, this year’s edition showed executives grappling with a far more fundamental set of challenges.

Sales of Apple’s most critical product, the iPhone, have been relatively flat since 2015. That mirrors a larger plateau the smartphone industry has reached. Apple finessed this last year by introducing the iPhone X, a super pricey version that has helped the company set revenue records even as it sells roughly the same number of phones.

In the coming years, however, the trend seems clear: Apple likely can’t count on sales of iPhones to drive growth. Which brings us back to WWDC. In years past, the swath of new features and updates to iOS were designed to drive iPhone sales.

Now the goal has shifted somewhat: Get people to spend more time with their iPhone. That, hopefully, will increase monetization of each current user as they download more apps, try out the augmented reality features, make Memojis of themselves, do group Facetime calls, and so on and so forth.

But this raises the problem that Apple senior vice president of software engineering Craig Federighi paused to address in the most somber-sounding voice he could muster: “It [phone usage] has become such a habit that we might not recognize how distracted we’ve become.”

So Apple introduced a host of features to make smartphones less intrusive when iOS 12 arrives: a Do Not Disturb feature so that if they see their screen at night in bed they won’t get “spun up,” as well as the ability to set time limits on apps.

Of course, Federighi had to stand in front of thousands of developers and explain to them how he was going to make sure users could limit use of their apps that Apple wants them to build more of so that people spend more time on their Apple devices. Developers could be forgiven for thinking they were hearing mixed messages. Same for users, come to think of it.

Apple can take some solace in the fact that it is not alone in facing this dilemma.

As part of Kleiner Perkins partner Mary Meeker’s annual internet trends presentation last week, she noted that there was no growth in smartphone sales last year and that growth in the number of internet users was slowing dramatically. Tech companies of all stripes then would need to figure out how to make more money off existing users.

Fortunately for these companies, services like payments, mobile video watching, messaging, and ecommerce are driving higher usage. But is this making our lives better? Is it good for the economy? Are we happier? 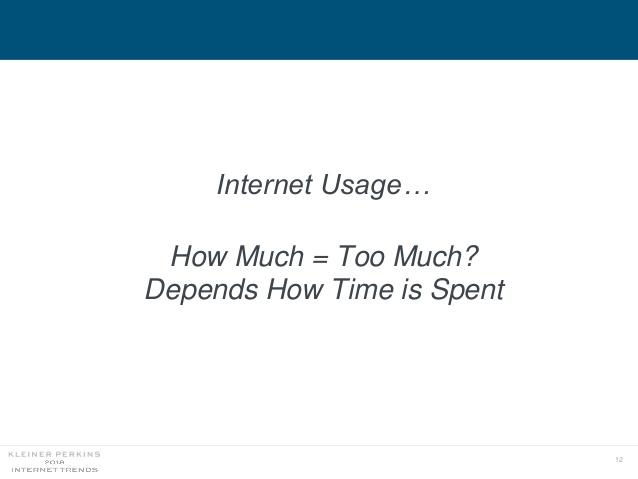 And this is essentially the problem Apple is trying to navigate. Maybe it’s unrealistic to expect Apple or any other tech company to save us from ourselves and our own worst habits. And yet we still want them to try.

Maybe it’s enough that Apple looks like it’s trying. And maybe we’ll all be distracted enough by endless Facetime calls where we stare at dozens of Memoji versions of friends and colleagues that we’ll stop worrying that technology is creating a void in our souls that we can only fill with more technology.