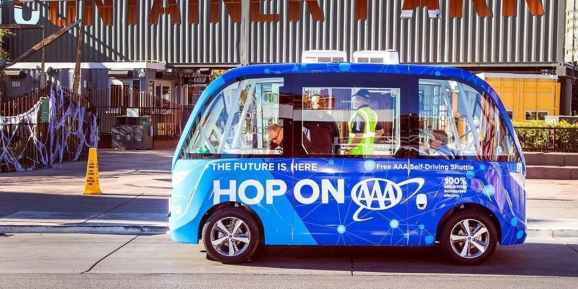 You’ve heard of getting married in Vegas. Lots of people do it — around 300 happy couples each day, in fact. City hall and the Strip’s many chapels have a virtual monopoly on the ceremony, but the American Automobile Association (AAA) wants to change that.

On Friday, the organization announced a competition for a couple willing to tie the knot in one of its Navya cars, the self-driving shuttles that ferry folks between Las Vegas hotspots including the Fremont Street Experience and Donut Bar. Interested Nevada residents 21 or older have until June 20 to submit an essay explaining why, in 400 words or less, they deserve a wedding aboard an autonomous bus.

The lucky bride- and groom-to-be will get a 10 a.m. ceremony on June 30 in the Downtown Las Vegas Container Park. The wedding will be a stationary affair, but after the exchange of vows, the shuttles will carry the newlyweds through Vegas’ Fremont neighborhood.

“Giving a lucky Nevada couple the distinction of being the first to get married on a self-driving vehicle is more than a cool story for their family and friends,” Michael Blasky, a AAA spokesperson, told the Review Journal. “It’s also a way to help people think more broadly and practically about how the technology will improve their daily lives.”

The AAA shuttles, which were designed by French startup Navya, have been in operation since November. They sport lidar sensors, GPS, cameras, and vehicle-to-infrastructure (V2l) connectivity that lets them exchange data with sensors embedded in Las Vegas’ traffic signals. They seat up to eight passengers, including a human operator ready to wrest control from the system in the event of an emergency.

Tests got off to a rough start — one of the shuttles made headlines when it was rear-ended on its first day of operation. But they’ve been accident-free since.

“For the past 100 years, AAA has been committed to the safety of Members and the public out on the road,” AAA said in a statement. “AAA believes that autonomous technology has potential to reduce traffic accidents, most of which are caused by human error.”

Las Vegas isn’t the only city experimenting with self-driving public transit. Ann Arbor, Michigan deployed Navya’s self-driving shuttles on the University of Michigan campus in June 2017, and the city of Gainesville, Florida plans to test autonomous buses from Transdev Services in the coming months. Bellevue, Washington is also in discussions to pilot self-driving van pools.