For many peer-to-peer payment apps, the way to send money to other users is simple — enter the recipient’s name or phone number and the amount of money and hit send. But what if you want to send money to say, your bartender or a local vendor at the farmers market, and neither of you needs to know details about the other?

That’s the premise behind Mezu, a new type of payments app that is launching today to “let people give and get money without sharing any personal information.” The app is available to download for free on both iOS and Android. The company also announced today that it has raised a $10 million round, led by Pittsburgh’s Draper Triangle Ventures. JumpStart Inc., Draper Associates, the Ohio Innovation Fund, and North Coast Angel Fund also participated.

Headquartered in Cleveland, Mezu currently has 25 employees. The company was cofounded by Yuval Brisker and Pedro Silva. Brisker, who also serves as Mezu’s CEO, previously cofounded TOA Technologies, which was acquired by Oracle for an undisclosed amount in 2014.

Brisker told VentureBeat in a phone interview that he got the idea for Mezu while traveling and finding himself in situations where he wanted to tip the parking attendant or hotel bellhop but didn’t have any cash.

“I realized the payment apps that were in the market didn’t really address the need to actually have cash — they were more akin to what I would call a virtual check, meaning you’re sending money to someone you know,” Brisker said. “But in fact cash itself is this tender that people give to each other, whether they know each other or don’t know each other.”

So how does a Mezu transaction work?

In the Mezu app, the user enters the amount of money they want to give in that specific transaction. Then Mezu generates a one-time, unique, four-digit code that the giver shows to the recipient of the transaction. The recipient then enters that code into their Mezu app to get the money. The giver can also set the code to expire after a certain amount of time. The giver doesn’t receive any contact information about the recipient once they use the code — just a notification that “you paid $5.”

As with other peer-to-peer payment apps, Mezu users can still create a contact list to send money to people they know by name. But Mezu doesn’t have a social feed component like Venmo, which shows other users who that person has sent money to and for what purposes — something that has resulted in a phenomenon known as “Venmo stalking.”

Users can sync their Mezu account to a bank account, debit, or credit card to withdraw or deposit money. They are charged a 3 percent fee on each credit card transaction, and a 1.5 percent fee if they select the “Fast Withdraw” option, which sends money to their bank account that day. For users who don’t have a bank account, Mezu also advertises the ability to get paid and store money in a FDIC-insured virtual account.

In addition to Venmo, Mezu will also face competition from Zelle, a peer-to-peer payment app backed by some of the largest banks in the U.S., and of course Venmo parent company PayPal, which currently counts 237 million active accounts.

The primary use case for Mezu is people sending cash to other individuals, but Brisker says that the company is also looking to partner with businesses, nonprofits, and other organizations to make it easier for people to donate. For example, Mezu was a sponsor of the Los Angeles Pride festival this past weekend, encouraging people to donate to LA Pride on the Mezu app. In this case, businesses can create a drop code that users send money to. 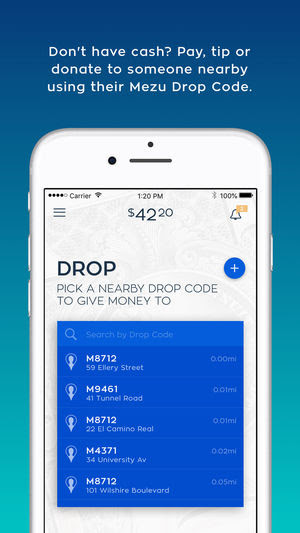 “That way, it could very much be an impulse donation — people could donate during the festival and during the parade,” Brisker said.

In speaking with VentureBeat, Brisker said he believes that the time is ripe for Mezu to enter the market, especially following consumer blowback from the Cambridge Analytica-Facebook scandal.

“There’s hunger out there, for a new sort of generation of apps … that really focus on making sure people’s information is protected,” Brisker said.