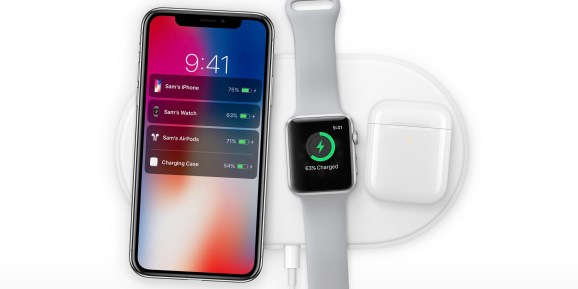 Apple’s previously announced but still unreleased AirPower charger is now expected to ship in or before September 2018, Bloomberg reports today. The news follows a string of technical issues that prevented the accessory from arriving earlier in the year. These issues have apparently been addressed, enabling the wireless charging mat to go into testing at Apple employees’ offices ahead of general availability in the fall.

According to the report, the three-device charger has suffered from overheating and issues with circuitry and software since it was announced in September 2017, thus requiring additional engineering time. Because it is designed as a mat to let users place up to three different products — iPhone, Apple Watch, and AirPods — anywhere on its top, it needs to accommodate multiple and differently sized chargers being placed all over the surface.

The most interesting new detail is a claim that AirPower is using “a custom Apple chip running a stripped-down version of the iOS mobile operating system to conduct on-device power management and pairing with devices.” Fixing bugs in that firmware has been another of AirPower’s challenges, though the presence of an iOS-capable chip in a charging mat raises the prospect that the accessory will also be saddled with an unrealistically high price. Each of the supported devices already includes a charger, and single-product wireless chargers can generally be had for $30 to $50.

As Apple is known to be obsessive about removing buttons and ports from its devices, the company apparently considered entirely removing a wired charging port from the iPhone X. However, it ultimately chose not to do so due to the slower speed of wireless charging and the higher price of bundling a wireless charger.

Bloomberg points out that AirPower’s extended development cycle “is another indication that Apple continues to struggle with last-minute engineering and manufacturing issues, particularly for first-generation accessories.” The Apple Watch, Apple Pencil, AirPods, and HomePod all suffered from initial availability issues or delays, as did the flagship iPhone X, which famously took until November to hit stores. Even so, most of the products have sold well once they actually became available.

While Bloomberg’s reports are almost universally reliable on upcoming Apple products, AirPower’s release date has been the subject of speculation for quite some time. A report out of Japan claimed that it would hit stores in March, and some expected it to roughly coincide with WWDC earlier this month. Assuming that the bugs are all addressed, the date for the finished product will likely be announced alongside details of a wireless charging case for AirPods, which was promised at the same time.