As Facebook’s algorithmic News Feed changes depress referral traffic and advertising continues on a slow decline, publishers are pursuing out-of-the-box strategies to make up for revenue shortfalls. The New York Times, for example, is trying to entice would-be subscribers with expanded digital food and crossword puzzle sections. And BuzzFeed, building on its past product development efforts, is marketing Tasty-branded kitchen accessories in Walmart stores.

Digital commerce is another area of intense interest for media companies, and it’s no mystery why. Shopify projects that worldwide retail revenue will rise from $481.2 billion in 2018 to $712.9 billion by 2022, and that in two years the number of potential customers will hit more than 1.2 billion.

Narrativ, which is based in New York City and launched out of stealth in August 2017, optimizes links to product pages in publishers’ buying guides, feature articles, reviews, and news items. Much like Skimlinks and other affiliate marketing networks, Narrativ operates on a revenue share business model. But unlike Skimlinks, Narrativ adds an intelligent, dynamic layer to links that affords retailers far more customizability than a run-of-the-mill buy button. 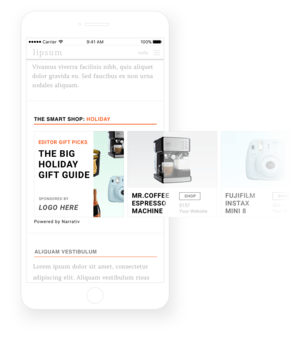 “We saw that the relationship between large publishers and large retailers wasn’t being optimized,” Chen told VentureBeat in a phone interview. “The links that were being directed toward retailer sites were often broken and didn’t reflect accurate information. Products go on sale or change all the time.”

That’s where Narrativ’s SmartLink technology comes in. For publishers, it’s a hands-free affair: The system automatically ingests the product links in articles and extracts structured data from them. Then, with the help of artificial intelligence, it compares the corpus to product data from retailer feeds, ranks the product listings according to availability, price, and bids (more on those later), and creates a container — the aforementioned SmartLink.

Narrativ’s tech is smart enough to detect 404 errors — those pages you see at the end of a broken link. And it integrates seamlessly with popular content management platforms like WordPress.

As Chen explained, an increasing percentage of publishers’ traffic comes from search engine optimized (SEO) stories — articles that rank highly in Google Search, Microsoft’s Bing, and other search engines. But as those articles age, the links to product pages inevitably break, which doesn’t make for the best user experience. 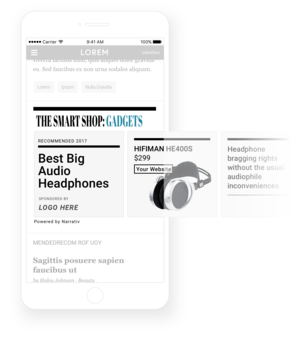 “Not sending readers to out-of-stock or 404 pages builds ready loyalty,” she said. “We’ve restored more than a billion links.”

Partly as a result, publishers who’ve integrated Narrativ’s technology — including Allure and NYMag — have seen a 250 percent uplift in earnings.

Readers aren’t the only ones who benefit. On the retailer side of the equation, brands bid for clicks in real time, and they’re able to target users by the amount of exposure they’ve had to a brand or product and run campaigns on units like product galleries and carousels.

The numbers speak for themselves. Narrativ drove $57 million in ecommerce revenue, and retail partners like Target-owned Dermstore saw 685 percent year-over-year growth and a 67 percent return on investment.

To date, Narrativ has raised $3.5 million in funding. This week, it was awarded standing of technology pioneer by the World Economic Forum.