Europe’s AImotive is taking its self-driving cars up a notch by testing them on Highway 101, Silicon Valley’s busiest highway. I know that it works because, brave soul that I am, I went riding in one of the company’s cars for a demo.

The demo included a test pilot, a co-pilot, company CEO Laszlo Kishonti, a marketing person — and me. I was slightly nervous and made jokes about whether I needed to create a will. But they assured me it was perfectly safe. The self-driving car software took over as we got onto the freeway. It handled things like lane changes and slowdowns, and the driver only took over as our speed dropped below 40 miles per hour amid heavy traffic.

Back in January, Budapest, Hungary-based AImotive raised $38 million in a third round of funding to build out its software for autonomous cars. So far, it looks like AImotive is making good use of the money. After all, I’m still alive.

“The 101 is the hardest,” Kishonti said, in an interview. “The road surface is bumpy. The car is jumping up and down at 65 miles per hour, making it hard for the sensors. The lane markings are not really visible, and the traffic is higher. We have to analyze all of that data to be able to handle the car on the road.” 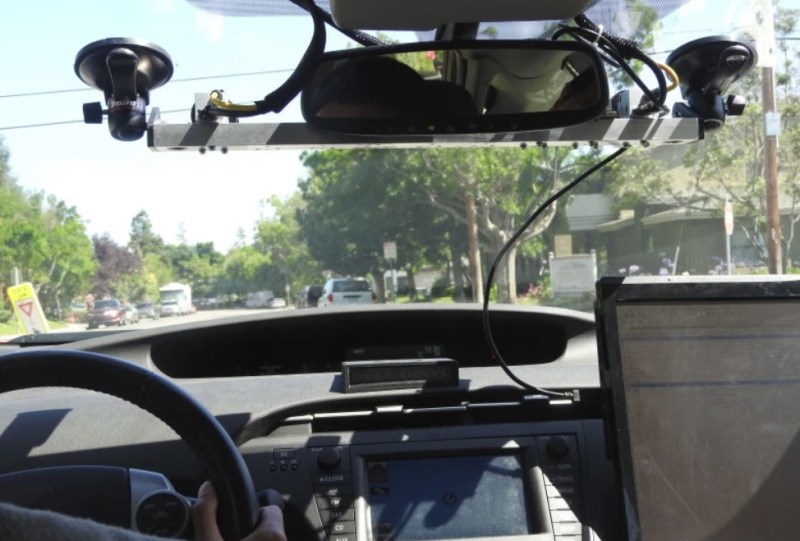 Above: The view of AImotive’s self-driving car from the back seat.

The company’s software takes data from autonomous car cameras, radars, and ultrasonic sensors. Then it identifies pedestrians and other hazards for the artificial intelligence driving system to avoid. It controls the steering wheel and other driving components in the car while finding a path forward.

The system worked reasonably well, from my perspective. The car changed lanes more abruptly than a human would, which didn’t give me much peace of mind. It also was slow to decelerate when we saw a bunch of red lights ahead of us. While the car’s software may believe its actions are safe, I think it has to be more mindful of how human passengers feel when in situations that could require human intervention. Otherwise, it was fine.

While other car companies are spending lots of money on each self-driving car, AImotive is developing a low-cost solution. It relies on affordable, off-the-shelf camera sensors and AI vision processing. In the back of the car is a big computer with Nvidia graphics processing units, but it does not use Nvidia’s more expensive Drive PX AI supercomputers. AImotive is targeting solutions that might add about $5,000 to the cost of a car, while other car companies are targeting vehicles that could cost $300,000.

After receiving autonomous testing licenses on public roads for multiple locations, the company started testing its car fleet and its main product, AIDrive software, in Hungary, Finland, France, and California. It has begun further testing at automotive hubs in Japan, China, and in additional U.S. states, including Nevada. In all of those locations, the company uses the same self-driving car software. 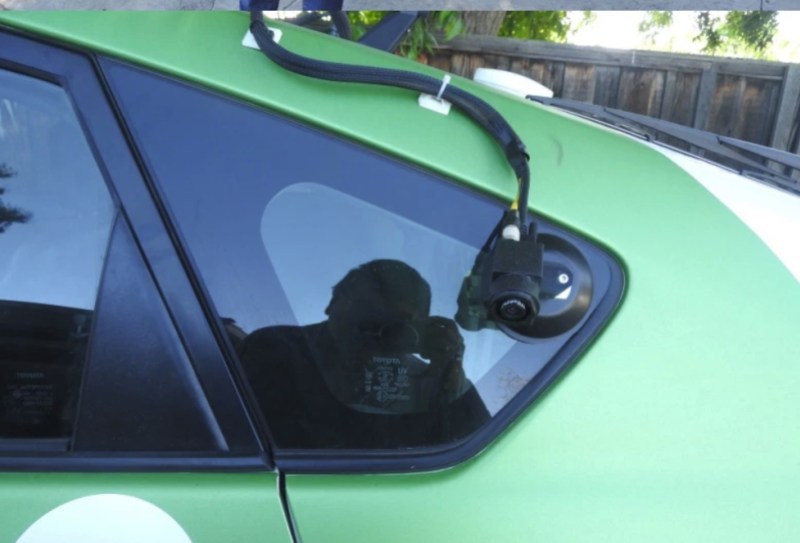 Above: One of numerous cameras on AImotive’s self-driving car.

Kishonti said that AImotive has taken inspiration from the aviation industry in designing its in-house development process and tools. He noted that aviation pilots have to train in simulators for many hours before they ever get behind the controls of a real airplane. That’s one reason it’s 10,000 times less dangerous per mile to fly in a plane than drive in a car.

One of the company’s software products is AISim, a virtual simulation environment built with the Unreal game engine. It’s kind of like a driving game, but with lots of instrumentation, photorealistic environments, and other features required to accurately test self-driving car software. It also runs on more than a single graphics processing unit (GPU).

With this simulation software, companies can test whether their self-driving cars can operate safely in a variety of environments, such as a night or on rainy days, Kishonti said.

“With simulation, everything is repeatable,” he added. 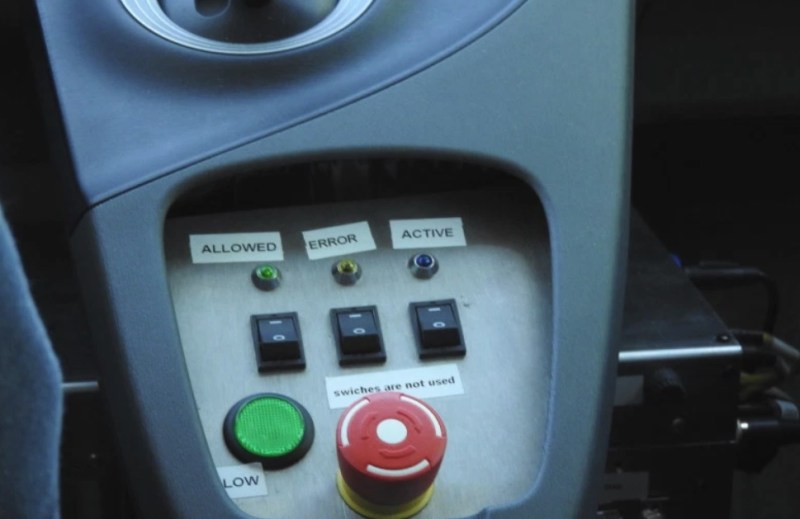 Above: The big red button lets a driver take over immediately in a self-driving car.

At our GamesBeat Summit 2017 event, Kishonti spoke about using simulations such as the Project Cars video games for inspiration when it came to developing software that can spot pedestrians in real-world conditions.

AImotive also provides a hardware platform that works with its software. The model that I rode in had a big computer in the trunk for low-power, high-performance embedded computing.

“The problem is there are no low-cost AI-optimized processing chips, so we use Nvidia GPUs,” Kishonti said, noting that AImotive designed its own chip as part of its hardware platform.

AImotive now has about 200 emloyees across numerous offices, and it has been working on development of its products since 2016. This year, the company expects to start urban self-driving tests. 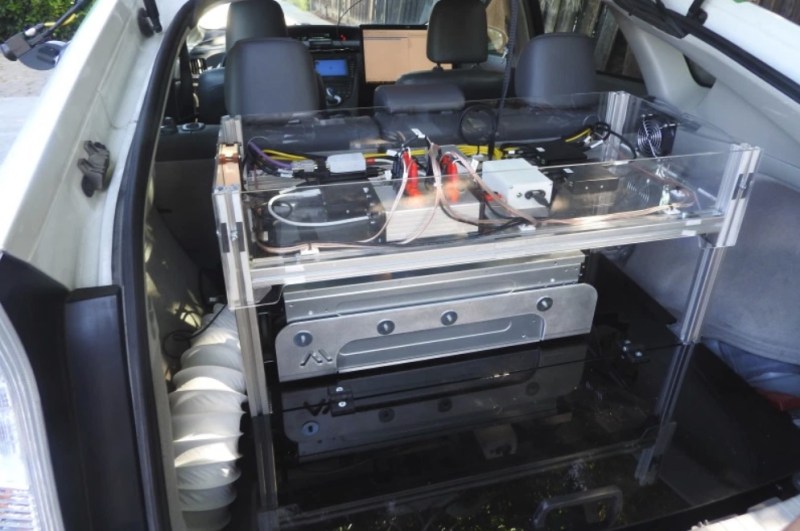 Above: Nvidia-based hardware in the trunk of AImotive’s self-driving car.

Looking forward, AImotive expects to commercialize three software products. One can handle valet parking for cars. Another handles highway autopilot, and the third is responsible for urban driving. Each of those tasks is successively harder to do and requires more processing power. The urban version is difficult because it requires more sensors to make sure it can spot all of the pedestrians in an area.

When Uber had its fatal pedestrian crash with its self-driving car in Tempe, Arizona, AImotive started getting a lot of questions from partners, investors, and journalists. The company notes that it always has two people in the car during testing: a test pilot and a software engineer.

“They can react much faster, and our development focuses on safety, first in the simulator and then on the roads,” he said. “If a driver needs to interrupt the software and disengage, we generate a lot of data to go back to the servers, and we build a simulated copy of that situation.”

AImotive has also acquired data on public accidents to help refine its software. AImotive uses that data in its simulators, and it also feeds real-world data from its self-driving car tests into its simulators to make the overall software better. In each case, the company keeps track of which part of the software might be at fault if there is something to fix, based on the software’s real-world performance.

“We are working on improving it every day, and it will be a few years before everything is tested, approved, and ready,” Kishonti said.