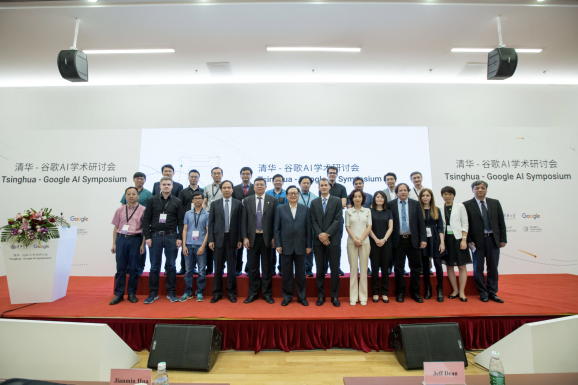 Today at Google’s AI Symposium in Beijing, Tsinghua University revealed plans to open a center for artificial intelligence research and development in China. In a related announcement, it said that Jeff Dean, Google’s AI chief, will serve on the University’s computer science advisory committee.

The Tsinghua University Institute for Artificial Intelligence, led by Bo Zhang, dean of the Chinese Academy of Sciences, and Turing Award laureate Andrew Chi-Chih Yao, will focus on new types of AI hardware and core algorithms, according to the university, and collaborate with tech companies such as Tencent and Horizontal Robotics.

It’ll also work closely with Google, which opened an AI center in Beijing in December 2017. The Mountain View-based company is already involved in research at Peking University, the University of Science and Technology of China, and other institutions in the region.

“Today’s AI development still needs a fundamental theoretical framework, and it cannot advance without theoretical innovation,” Tsinghua University’s president Qiu Yong said in a statement. “As a force for AI research, universities have a unique advantage in exploring fundamental research.”

Tsinghua University’s announcement comes as China invests heavily in AI research. In 2017, China’s State Council published an ambitious policy blueprint calling for the country to become “the world’s primary AI Innovation center” by 2030, which it projects could be worth $150 billion.

To that end, AI-related patent submissions in China tripled between 2010 and 2014 compared to this year, according to CB Insights, and over the past six years, AI startups in the country have attracted more than $4.5 billion. In early 2018, Chinese startup SenseTime raised $600 million in a funding round led by Alibaba, giving it an implied valuation as high as $4.5 billion.

The government recently announced plans to build a $2.1 billion AI technology park in Beijing. And Tianjin, a city located a few hours outside of Beijing, took the wraps off a $5 billion fund to support AI development.