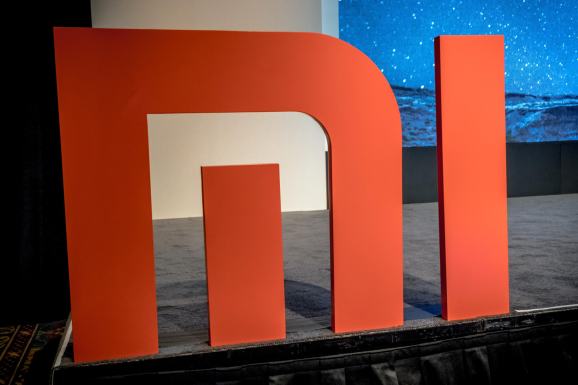 Xiaomi logo on stage at the 2017 Consumer Electronics Show.

That values the firm at about $54 billion, almost half the valuation industry insiders touted at the beginning of the year.

The pricing comes at a delicate time for Hong Kong’s stock market, with the benchmark Hang Seng index falling 6.5 percent this month and 4.8 percent this year as investors fret over escalating trade tension between the United States and China.

As such, Xiaomi’s share sale is widely seen as a test of market sentiment for what is expected to be a packed second-half of the year for Hong Kong IPOs, with offerings including online food delivery-to-ticketing services platform Meituan Dianping.

China Tower, the world’s largest mobile mast operator, has won approval for a Hong Kong IPO that could raise up to $10 billion. However, its listing timing will depend somewhat on how well Xiaomi’s deal is received, sources have told Reuters.

Xiaomi declined to comment. The people declined to be identified as the information was not public.

“I’m not surprised at all by its pricing at the bottom,” said Hong. “It claims to be a hardware plus internet services company, but the majority of its revenues come from the smartphone business. It’s still way more expensive than Apple on a price-earnings basis.”

Xiaomi’s price values the firm at $53.9 billion before the exercise of a “greenshoe” or over-allotment option, whereby additional shares are sold depending on demand.

The valuation is far below the $100 billion touted by sources earlier this year as well as the more recent $70 billion-plus target that some analysts and investors saw as aggressive. Xiaomi was valued at $46 billion in its last fundraising in 2014.

Xiaomi’s IPO adds to the $6 billion of new listings so far in 2018 in Hong Kong and is set to be the first under the city’s new exchange rules permitting dual-class shares common in the tech industry in an attempt to attract tech floats.

It was initially expected to raise up to $10 billion, split between Hong Kong and mainland China, but last week shelved the mainland offering until after listing in Hong Kong. Cornerstone investors included U.S. chipmaker Qualcomm and telecom service provider China Mobile.

Set up in 2010, Xiaomi doubled its smartphone shipments in 2017 to become the world’s fourth-largest maker, according to Counterpoint Research, defying a global slowdown in handset sales. It also makes internet-connected home appliances and gadgets, including scooters, air purifiers and rice cookers.

Beijing-based, Cayman-domiciled Xiaomi is due to start trading in Hong Kong on July 9.

(Reporting by Fiona Lau of IFR and Julie Zhu; Editing by Christopher Cushing)