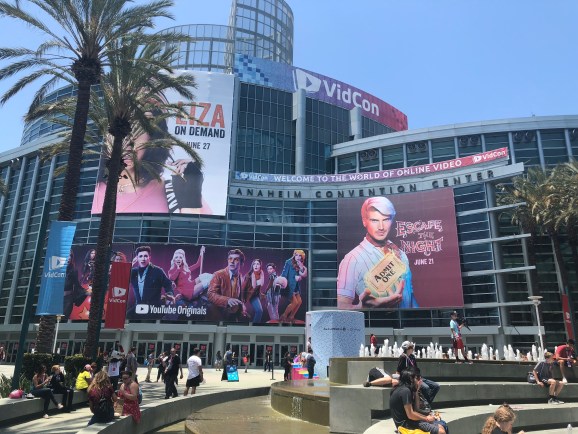 Last week, we attended our first VidCon, a convention for creators and fans of online video. The conference, founded in 2010, now hosts 25,000+ attendees yearly in Anaheim and is considered one of the premiere destinations for brands to reach the Gen Z demographic.

In our three days at VidCon, we spent time with dozens of brands in the convention’s giant Expo Hall and listened to hundreds of social influencers and industry experts share their insights and stories. We learned a lot about what Gen Z’ers care about and how to engage this demographic, which now makes up the largest percentage of the U.S. population. Here are our top five takeaways:

Brands are tempted to script influencer posts, but creators don’t want to feel like they’re shilling a product. Benny Fine (Fine Brothers Entertainment, 17 million subscribers) includes a clause in contracts that allows him to ignore 50 percent of edits that brands propose. Creators are more positive on longer-term partnerships that integrate the brand naturally, like a video series or a channel takeover. If fans feel a like brand is enabling content the creator otherwise couldn’t make, they’re more likely to have a positive association. Kurt Schneider (10 million subscribers) said he only works on brand campaigns that feel consistent with “what fans expect” from him, and where he can make the brand the “hero” of the video in an authentic way. He cited his Candyman video with M&Ms as a successful example —  it looked like something he might normally make, got a great reception from his audience, and the like/dislike ratio was in line with his non-sponsored content.

On the topic of authenticity, producers of YouTube Red series Escape the Night said they’ve found success in treating influencers like stars, not actors. Fans want to see influencers appearing as themselves, not as another character. Escape the Night is what showrunner Adam Lawson calls a “surreality” show. Influencers are placed in a historical setting and have to complete challenges to make it back to the present. While the show has a group of background actors with scripted lines, the influencers were completely unscripted and were asked to just respond naturally to the action around them.

Gen Z cares about doing good in the world and wants to see brands supporting initiatives around empowerment, diversity, and inclusion. Think about how your company can connect with and support creators who speak up about issues like body image, gender identity, and cyberbullying. A great example of this type of creator is Kati Morton, a licensed therapist who makes videos to spread awareness about and destigmatize mental health. She was featured in YouTube’s VidCon keynote about the power of the platform.

It’s no surprise that teens hate pre-roll ads. Ads are also an inconsistent revenue stream for creators, as they have to rely on the platform’s algorithm and CPMs are low. Smart creators diversify their revenue through subscriptions for premium content, brand partnerships, and merch/live shows. In a panel on monetization, Hannah Hart (2.5 million subscribers), Burnie Burns (9.5 million subscribers via Rooster Teeth), and Philip DeFranco (6.2 million subscribers) all emphasized that they’ve focused on non-ad revenue .  Rooster Teeth has 300k+ paying subscribers for its SVOD service, while merch and live shows have been crucial for Hannah and Phillip.

YouTube’s product announcements at VidCon focused on making it easier for creators to monetize beyond ads, including channel subscriptions and merch shelves that live directly below videos. The company also released early stats on some of its other monetization initiatives  —  50 percent of channels using FameBit doubled their revenue in the first three months of 2018, and 65 percent of channels using SuperChat have more than doubled their livestream income.

In terms of brand interactions, Gen Z’ers primarily care about two things — interactive or “do-it-yourself” experiences, and Instagram-worthy visuals. Most of the VidCon brand exhibits were glorified photobooths, and many had signs encouraging visitors to post on Instagram with a specific hashtag. The same goes for digital brand content — anything that kids or teens can replicate at home, whether it’s in gaming, cooking, or building things, is likely to do better than content that is just consumed passively.

To generate real value from campaigns, many brands have set the following priorities for influencers they partner with: (1) engagement (likes, comments); (2) views; (3) subscribers. As purchase behavior continues to shift towards mobile and social platforms, influencers have a huge ability to drive sales, but it’s key that viewers actually watch and engage with the content and use it to make purchasing decisions.

The increasing focus on engagement over reach was echoed by brands and publishers, whose KPIs for content have shifted away from pure views. Jay Holzer, Head of Linear Programming at Tastemade, mentioned that his team primarily focuses on watch time over number of views. They want to ensure they are building a real connection with viewers who will return to their page. Similarly, NBC worked with 40 music YouTubers for a The Voice campaign , and while they tracked views, they specifically focused on boosting search traffic for The Voice, which was up 170 percent over the course of the campaign.

As digital creators gain fame but struggle to monetize the way that traditional celebrities can, we predict huge opportunities for brands to engage younger audiences in a creative way at fairly low cost. We’re excited to see how brands and creators innovate here. And we anticipate some truly revolutionary results for brands who embrace this new wave of partnerships.