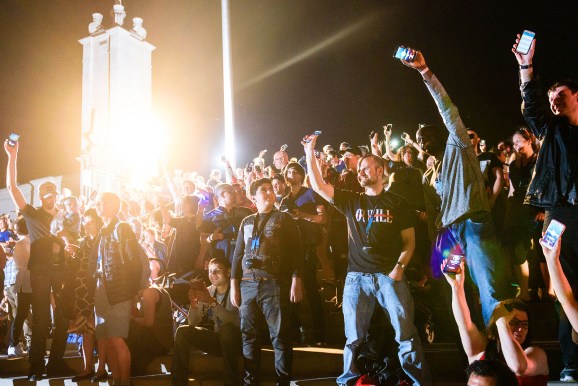 Smart speakers and stereos aren’t the only way to get a party started. AmpMe has an app that makes it possible to sync and play music through smartphones or Bluetooth speakers.

Today AmpMe announced it will begin to roll out the use of ultrasonic inaudible sounds to sync multiple devices, detect latency, and power its technology that tethers smartphones and Bluetooth speakers to play the same music all at once. The tone is sounded to measure distance between devices and also uses a device’s microphone to determine the amount of time between when a person presses play and when their phone actually begins to play music.

That data is used to train predictive algorithms that guess delay down to the millisecond based on factors such as make and model of a smartphone or whether the device has cellular coverage or Wi-Fi.

AmpMe launched in September 2015 and has been downloaded more than 12 million times, with its largest user bases in India, the United States, and Brazil, AmpMe founder and CEO Martin-Luc Archambault told VentureBeat in an interview.

The app can play music from your personal music library or popular streaming services like Spotify, YouTube, and SoundCloud.

Prior to the introduction of inaudible sounds through what AmpMe calls AutoSync, predictive algorithms and an audible chirping sound were used to determine the amount of time it would take a device to play music from the time a person presses the play button. In instances where the algorithm failed to get the timing right, users were invited to manually adjust their smartphones or Bluetooth speakers, information that is then used to inform how AmpMe works in similar scenarios in the future.

“What’s very hard is actually syncing to the millisecond, because if it’s 10 milliseconds off, you hear it,” Archambault said. “I think the trend is that phone speakers are going to become so good that Bluetooth speakers might disappear just like digital cameras. Nobody carries those things anymore.”

Based in Montreal, Archambault may be best known in Canada as a member of the cast of the CBC show Dragon’s Den, a startup pitch show akin to Shark Tank in the United States.

Apps like AmpMe, along with others like Soundseeder and SoundCloud’s Group Play mode, are attempting to solve a specific kind of problem: giving people a way to play music when friends gather and there’s no smart speaker or stereo available.

AmpMe calls each music experience a party, and users nearby or friends elsewhere in the world can sync to a party when they receive a notification or open the app.

A chat interface in each party allows for conversation, and partygoers can show their love with hearts or champagne bottle emojis or hate on a friend’s music taste with poop emojis.

AmpMe can handle playing music on a handful of phones at a house party or thousands of phones at once, as it did during a celebration of 375th anniversary of Montreal last year, Archambault said. That event set the standing record for most phones synced — 22,000 — Archambault told VentureBeat.

Since bandwidth can become an issue, AmpMe focuses primarily on getting right the use case when a group of friends get together rather than streaming a song for a stadium full of people.

“Sometimes what will happen is the phones will hear each other out and they’ll calculate the distance between one another and then they’ll automatically correct the offset. Because the speed of sound makes a difference, because you could be at the other end of the room and I can be here, so there’s a 3 millisecond offset we have to correct for. So all of the machine learning and AI is around the syncing algorithm and how they sync together and listen to each other to autocorrect the music,” he said.

AmpMe said it only plans to use its ultrasonic sound to remove latency between devices, but a number of devices use inaudible sounds to carry out actions. Amazon used inaudible signals to ensure every Echo speakers near a TV did not respond to the “Alexa” wake word during the Super Bowl earlier this year.

Software like Silverpush is also used in many smartphone apps to detect inaudible sounds and identify when a person is watching a particular television commercial or targeted advertisement.

Researchers have also found that subsonic commands triggered near smart speakers can be used to control Siri, Alexa, and Google Assistant to do things like make purchases, send text messages, and control smart home devices such as door locks, the New York Times reported earlier this year.